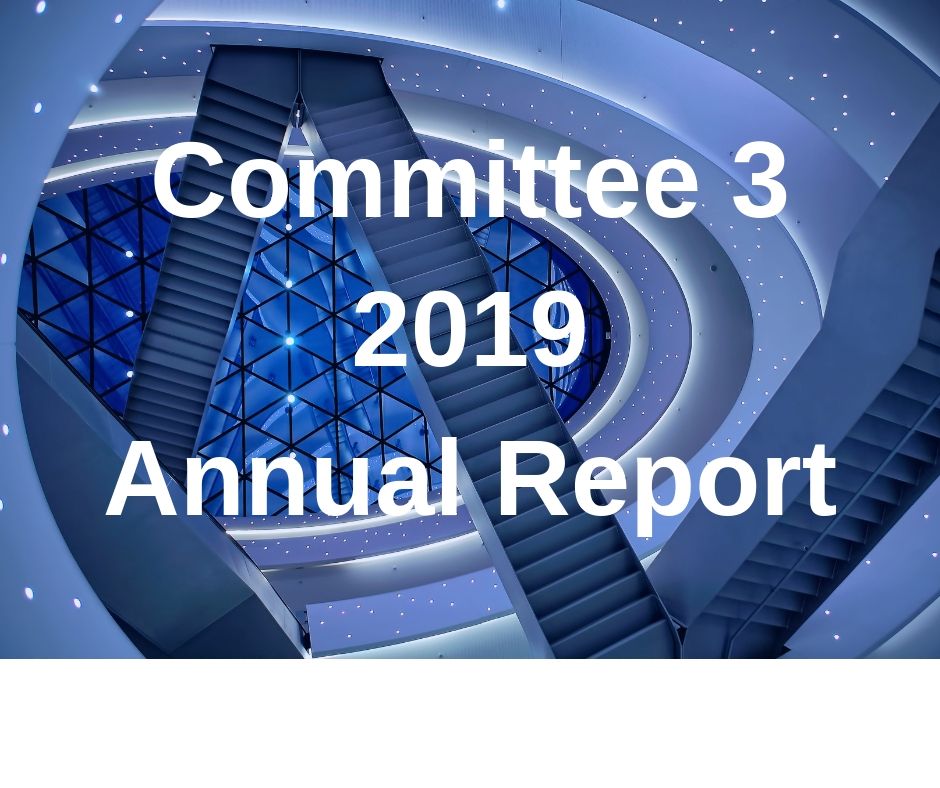 This report is the compilation of actions developed and implemented within Committee 3 between the 2018 General Assembly in Lillehammer, Oppland (NO) and the 2019 General in Larnaka (CY).

Activities are organised in 3 categories:

The AER Action plan, which brings together all the activities carried out within AER, is constantly updated.

“Road to the Future”: ongoing

“Road to the Future” is a project submitted under the Erasmus+ , within the Key Action 3 – Support for Policy Reform, designed around the 2019 European Parliament Elections.

The lead partner is JEF Europe – Young European Federalist. AER represents local and regional authorities. AER is responsible to connect young people and , especially via the involvement of the YRN. “Road to the Future” will last 16 months, from September/October 2018 to February 2020.

This project is funded by DG REGIO. It will:

The project officially started on 1st of April 2019 and will last for 12 months. The following regions, which have sent a letter of support for this project will be involved in different actions funded by the project to engage citizens and communicate about Cohesion Policy in their territories:
Trento (IT), Alba (RO), Timis (RO), Catalonia (ES), Varazdin (HR) and potentially Csongrad (HU).
All AER members are invited to share examples of communication campaigns on Cohesion Policy and to participate in the launching event of the project on 5 June 2019 in Larnaka on the occasion of the AER General Assembly.

The project is led by AER with the international communication agency MC Group (DE). The application was submitted to the DG Regio on the media calls for proposals. The project is part of AER’s work on Cohesion Policy.

Dialogue between elected politicians and Youth representatives to promote the active participation of young people in democratic life and foster debate around the major issues affecting youth. After several exchanges, the project initiator, the Province of Vojvodina (RS), and the potential coordinator, Timis County Council (RO), agreed that there the conditions to the submission were not met.

The Silver Economy Awards aimed to a sustainable European digital Silver Economy movement by promoting and rewarding innovative solutions to improve the quality of life for over 50s. The Awards were an opportunity to raise awareness around the lesser-known notion of the Silver Economy. They illustrate the breadth of the consumer markets and the public spending involved and the size of the opportunities available for entrepreneurs, investors, public authorities and civil society. Last year the Silver Economy Awards replaced the traditional AER Regional Innovation Award. The first Awards Ceremony took place on May 2018 in Brussels. SEED was a two-year project: 10/2016 to 09/2018

This is a follow-up of the former , which was implemented for several years in AER and was very successful. The supports innovation in the public sector & capacity building by allowing civil servants to be placed in another region for a few months, learn processes and practices there and share their experience when they come back. The action is led by Committee 3 President Radimir Čačić, Varaždin (HR)

In the framework of the cooperation with the European College of Cluny, AER agreed to offer  for regional in the first year the College would be operating. This initiative is now fully integrated with the civil exchange (see above). The idea in 2017 was to a training on youth mobility together with the Eurodyssey Steering Committee. This has now evolved and the AER Seminar in Cluny will focus on interregional cooperation, networks, territorial innovation. The aim is to further support regions to engage in interregional cooperation. With this training, AER will help regions to encourage the flow of knowledge and practices, support innovation and foster the resilience of territories through integrated interregional cooperation.

Committee 3 would like to exchange good practices on youth entrepreneurship and identify best practices in Europe. The idea is curricula, which could be applied in regions.

Members expressed the intention to follow up on activities on culture and health as well as wellbeing, education and culture to fight obesity.
The AER Transversal Group on Equal Opportunities held regular phone calls to identify joint actions on the topics identified by the Group.

The three AER committees and the AER Task Force on Migration worked closely together to develop messaging ahead of the International Migrants Day: Promoting Diversity in Regions event in Barcelona on Tuesday 18 December 2018.
Participants shared their experiences and good practices in diversity management at regional level, including examples of policies, programmes and projects promoting inclusion, participation in civic, economic and political life, positive intercultural interaction and the sense of belonging.

On the occasion of the 2019 Spring Committee Plenaries, Committee 3 gathered to assess progress, elect new representatives and define their work . The results of the elections are the following

On the occasion of the 2018 Autumn the Committees Plenary meetings in Vojvodina, the Committee on Culture, Education and Youth a place on the launch of the Civil Servant Exchange Programme, proposed by Radimir Čačić, President of this Committee. Members involved in the shared insights on the elements of success of such a and insisted on the high value of this experience.

Panel discussion at the Vojvodina plenaries on Open data for regional development: finished

On the occasion of the Autumn plenaries in Vojvodina, the panel discussion “Open data for regional development: governance, start-ups innovation” took place. The discussion focused on how public institutions collect and generate enormous quantities of data in areas as varied as unemployment, air pollution, hospital consultations and how this data can best be re-used to create or improve both public and private services. There is a need to change the political perception of Open Data and instead view it as for policy-making.

The event brought together policymakers, entrepreneurs, academics and representatives of the third sector for vivid exchanges. A follow up article with updates on what happened in Brussels was published.

Creation of an informal network of regions with a focus on immersion and visualisation of world heritage and cultural heritage. Best practices, exchange of methods and exchange of “products”, I.E. VR, AR & MR visualisations of different cultural heritages, museums and schools. Gävleborg (SE) will lead the action, other supporting regions are Västragötaland (SE) and Västernorrland (SE).

Västra Götland is particularly interested in developing cooperations around walking and hiking paths along cultural routes through the path of St Olov. Västra Götland is a “missing link” in the path from Santiago de Compostela to Nidaros and is developing this path. The path should be completed by 2031 for the big celebration of St Olov.
Members have been made aware of initiatives around cultural routes. So far no additional activities were planned. In case this topic is still relevant to members steps for implementation need to be defined at the Spring 2019 plenary meeting.

Members at the Committee 3 plenary meeting expressed interest on LGTBIQ rights and sexual identity in education systems. 2018 Spring no concrete initiatives were identified. In case this topic is still relevant to members steps for implementation need to be defined at the Spring 2019 plenary meeting.

Members at the Spring 2018 meeting expressed interest in exchanging experiences on sex and relationship education in schools. After the 2018 Spring plenaries no concrete initiatives were identified. In case this topic is still relevant to members steps for implementation need to be defined at the Spring 2019 plenary meeting.

Nordland (NO) expressed interest in working around the topic in education. The AER Secretariat disseminated information via the website and mail on opportunities in this field, in a project development workshop held in Brussels, which was attended by Varazdin (HR). Other opportunities which were shared on the AER website included:
–An update on Erasmus+ calls
–Information about an Erasmus + partner search with Madrid
–Information about a partner search on youth & technology

Members agreed in September 2018 that the Task Force on Cohesion will now be under the responsibility of the Bureau, which is also in charge of the other Task Forces. Joint actions include:
– Convene joint advocacy: Bureau Members adopted an updated position on the European Commission legislative proposals for the future EU cohesion policy, setting out the specific changes European regions propose to make to the new framework.
– Advocate towards the European Union and Member States
– Work in alliance with other relevant stakeholders and European associations
Flevoland (NL) is coordinating the implementation of the action and the cohesion policy task force help implement the action.

Member regions can decide to initiate joint actions and find partners among AER members. Regions can get support from the Secretariat to connect with other regions, get an overview of existing legal framework and identify relevant actions, target institutions. The AER Secretariat will also organise Breakfast Briefings to help regions organise their advocacy activities.

Members can propose new joint initiatives at any time during , these are then approved by the Executive Board and included in the work and the AER action plan.

The new Presidium of the AER Committee on Education, Culture and Youth will meet met on 4 June 2019 in Larnaka, to discuss the implementation of the Committee’s work for 2019-2020. They will agree on a series of actions to support the actions proposed by members on the occasion of the Spring Plenaries. This work is coordinated by Larisa Krizan-Breljac and Maja Zuber, the seconded officers for Committee 3 President Radimir Varaždin (HR).