You are here: Home / News / New rules, new roles for governments in a Sharing Economy 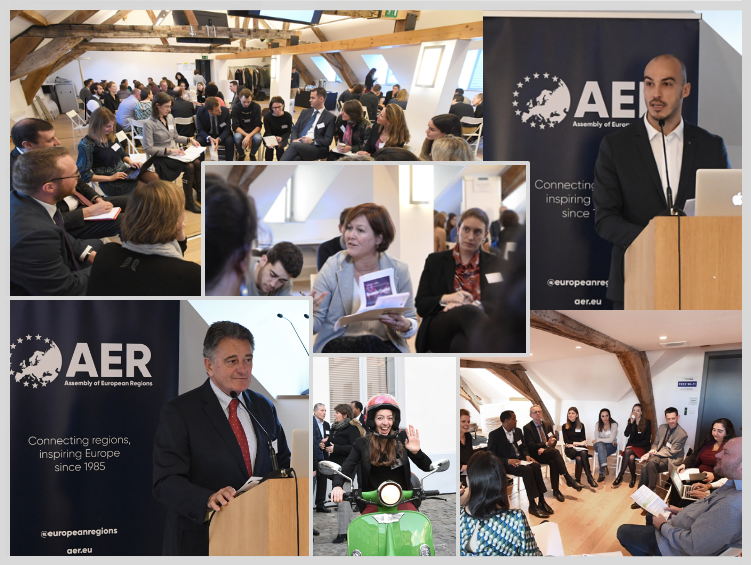 The Sharing Economy is disrupting not only transports and tourism, it may soon drastically change the way we envision public services, raising new questions for policymakers. On 4 December 2018 the “The Sharing Economy: Reshaping the way we do business” event, co-organised by AER, Brussels Capital and Catalonia brought together policymakers, entrepreneurs, academics and representatives of the third sector for vivid exchanges.

Governments in the Digital Age

The digital transformation changes the way institutions work, share information and organise power. This is why the topic is recurring in different AER thematic activities be it e-health, transports, food… Indeed it touches upon governance and multistakeholder cooperation.

With views to the sharing or collaborative economy, it poses new challenges to governments in terms of taxation but also for the protection of citizens, security of users and workers, or with respect to the support to innovation and SMEs.  As Lluís Juncà, General Director for Economic Promotion, Competence and Regulation at the Generalitat de Catalunya, explained, this raises the question as to what governments  should support and how. How should they regulate to the benefit of citizens? Different governments have taken steps to, at the same time provide protection to workers, and impose taxes. The disruption however goes further than taxes and insurances and involves changes in the very role of governments. This regards the way governments:

These questions were specifically addressed in the discussion group moderated by Anna Merino Castelló, who is an economist, expert in competition, better regulation and digital markets and has worked extensively with the Catalan government to define their sharing economy policy. This group included François Gerard, Managing Director at Helpper, an interface which connects people who need help, for instance for the groceries, with people who can help and would like to sell such services. A cooperation has already started in Flanders with a local government in order to help people with low incomes to access services via Helpper. Yves Muyters, is Project Manager at KlaarIsKees, a similar company, which allows individuals to either propose their paid services or, at the end-user level, to ask for support for a task. Mayo Fuster, Director of research on the collaborative economy at the Dimmons Research Group of the Open University of Catalonia, is well known for crowdsourcing the Barcelona policies on the sharing economy. She provided numerous examples on collaborations between the public sector and the entrepreneurs from the Sharing Econonmy in Catalonia. Èlia Ferrer, Public Affairs Manager at mytaxi The Taxi App, explained how for citizens what matters is the easy access to a service and its capacity to answer a specific need.

Business in a changing world

The group moderated by Aurora Sanz, Lawyer  at Grant Thornton, focused on the support to entrepreneurs. The sharing economy representing a wide span of very different types of businesses, it can be difficult for governments to navigate. Jean-Luc Vanraes, President of the AER Committee on Economy and Regional Development highlighted the difficulty to decide how to tax new services in the context of a new economy. A harmonised tax on digital services at global level in 2020 will simplify the situation. Mar Alarcón, CEO of SocialCar, a car sharing company explained how close contact with the Catalan government when developping the company, enabled them to provide feedback on existing legislation and advise on needed changes. This contact also ensured the company was gathering right type of data, regarding mobility and usages, to inform the government. Camille Lepinay shared experiences from the EU-Give project, a pilot project on the sharing economy initiated by the European Parliament, while Philippe Eiselein from the Chair on Social Entrepreneurship at the Vrije Universiteit Brussel presented elements of success for social entrepreneurs. Together the group agreed that key success factors were:

Governments also face challenges in the field of education and training, as it is likely that children and students today will have jobs which don’t even yet exist. In this context David Vuylsteke, founder of PiggyBee, a crowdshipping company and Lieza Dessein, Project manager at SMart, a cooperative supporting freelancers and empowering enrepreneurs, insisted on the need for peer learning, ceativity from an early age and acceptance of failure. The sharing economy is rarely adressed in economy lessons and more contacts and cooperations with entrepreneurs can be very beneficial for students. The digital transformation is not only about digital skills, it is also very much about interpersonnal skills, the ability to build connections and networks, to engage others. Creative hubs are a powerful tool in that respect as they provide a space where entrepreneurs meet others in a more engaging and facilitated way than mere co-working spaces.

Ethics: what is good, what should be supported?

The founder of Consumo Colaborativo, a Spanish language blog dedicated to exploring the trend of collaborative consumption Albert Cañigueral, facilitated a discussion around ethics, inclusion and how to define what is good and should be suported in the sharing economy. He reminded participants that technology doesn’t exist in the void, it exists in a legal and cultural context. The discussion brought together Víctor Moyano, a Project Manager at the Fundación Creafutur, a public-private initiative which identifies business opportunities with positive social and environmental impact, raises awareness and advises stakeholders, Xavier Marichal, the CEO of USITOO, a platform where users can borrow “things” instead of buying them and Dimitri Berliner, cofounder of Communa, an organisation which develops shared spaces in empty buildings. Contributors found that the platform economy intersects with several aspects: legal, social, taxation. More people are willing to share and provide services and while platforms are providing massive opportunities, key questions to be addressed to know what kind of stakeholders should b supported by governments could be:

-how to ensure these services are accessible?

-What about decent working conditions?

-How is the value generated by those activities shared?

-What is the model of governance of the business?

In general there is a need to make a difference between the many types of stakeholders of the sharing economy who can have diverging purposes. As Lieza Dessein mentioned in her keynote address, the narrative of the original sharing economy has been adopted by companies from the platform economy, which do not share collaborative values. This has created confusion both for users and for governments. Lieza Dessein proposed that the cooperative and sharing economy stakeholders reinvent a new narrative to be able to differentiate themselves from the other platforms.

Contributors in the discussion group on ethics, inclusion and social cohesion also suggested that “frictions” be potentially created to slow dow the pace of the sharing economy to adjust and make improvements on access, benefits, etc. The codes of conducts and guidelines adopted by some regions could be replicated in other regions and combined across different levels of governance (national, regional, local). At the moment regulation across Europe is uneven, which is why contributors in this groups advocated for harmonised rules.

This was the third year in a row that AER organised this special kind of mutual learning event on a current and transversal topic together with Brussels Capital. Previous events focused on “E-health: let’s find a common language” and “Artificial Intelligence: are regions up to the challenge?“. Stakeholders from the private and public sector, industry specialists, entrepreneurs, and policy makers engaged in genuine exchange. The idea being to share and discuss initiatives which can be implemented right away, not to develop an official declaration. This contributes to creating an environment of trust and free speech.

A major asset of these events is also to discover initiatives and hear of stories first hand. Entrepreneurs presented their work in the afternoon, which prove both exciting and interesting. Moreover, participants also had the opportunity to test Scooty’s shared electric scooters during the break, which was very entertaining.

In a setting where each participant is a contributor, this event aimed to generate new ideas, challenge people to think further and inspire policymaking.

Presentations,  pictures and the list of participants are available on the event webpage.