You are here: Home / Events / AER at Democracy Alive 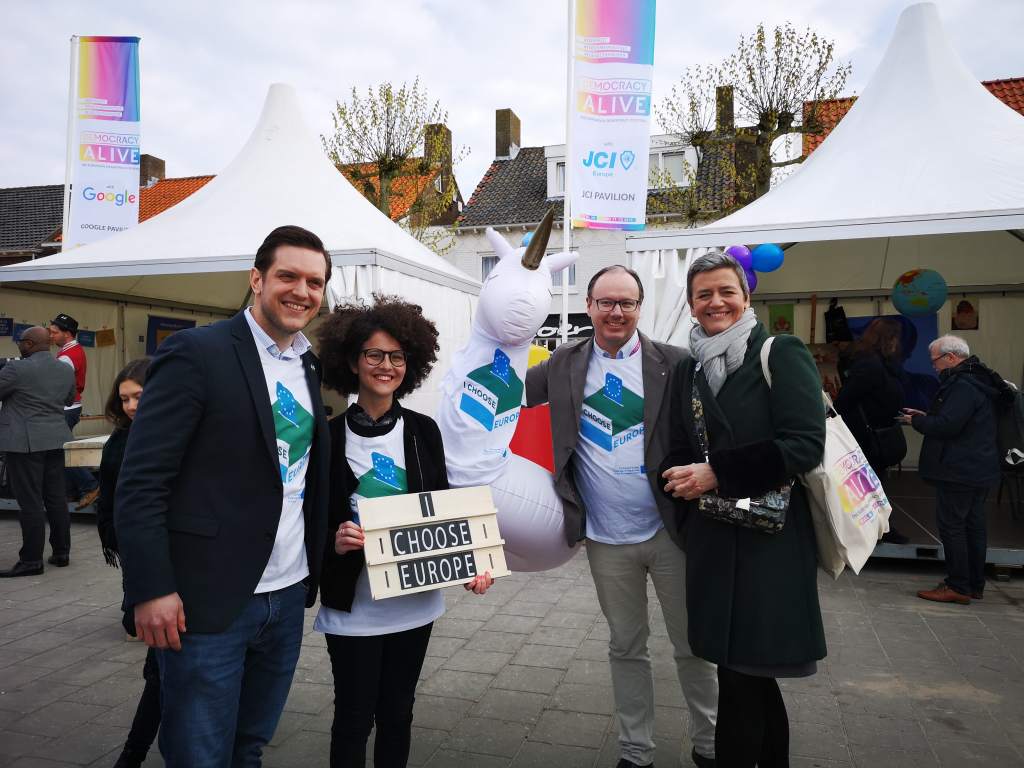 From 11 to 13 April 2019, AER attended the Democracy Alive festival on the island of Texel, North Holland (NL). Organised by European Movement in collaboration with the European Parliament it brought together citizens, stakeholders and elected representatives for three days of discussions, workshops and entertainment on the Future of Europe and the importance of active citizenship at European level.

The festival opened with a performance by Irish comedian Andrew Maxwell before participants at the main stage were joined by Michel Barnier, EU Chief Negotiator for Brexit, fresh out of discussions the evening before which resulted in the United Kingdom and European Union extending the Brexit deadline to 31 October 2019.

Mr. Barnier spoke in-depth about the United Kingdom’s departure from the European Union, summing it up in five short words: “Le Brexit – c’est lose-lose” before urging the audience, largely young people active in civil society around Europe to “take care of Europe”.

The importance of safeguarding democracy was the underlying theme of the festival. In the opening discussion by the Alliance of Democracy, of which AER is a member, Magnus Berntsson, President of AER said: “Why do we face challenges in democratic processes across Europe? Our society needs to be built from the bottom: We need to pay more attention to local politics. Strengthening the regional levels within the political system is vital to implement democracy for citizens on an everyday basis.”

We need to bring improvements in the living conditions and better opportunities to our citizens. Human rights and democracy go hand in hand. Cooperation between the various stakeholders, including local and regional authorities, civil society, businesses and academia, is essential to achieve progress. The implementation of the principle of subsidiarity is also key to ensure the EU delivers for its citizens.  “If we don’t vote, we can’t complain afterwards” The European elections are too important to leave to the others”

The AER President also spoke at the AER pavilion in a discussion with the European Parliament and Young European Federalists about the I Choose Europe campaign – part of AER’s ongoing Road to the Future EU-funded project. The consensus in this discussion was the importance of encouraging young people to get out to vote in the upcoming May 2019 European Parliament Elections.

On Thursday evening, Magnus also participated in a high-level panel discussion organised by a consortium of actors, led by Metro Public Policy, on responsible business and plastics at the beautiful Burghtkerk in Den Burg, Texel. In the debate he stressed the importance of subnational actors in transitioning to green growth and implementing the 2030 Agenda. Furthermore, he highlighted that public bodies should use procurement as a means to incentivise a sustainable economy by creating new markets for green, bio-based plastics. In doing so he gave the example of the healthcare sector in Västra Götaland where his region leads by example.

On Friday morning, attention turned to the topics of cohesion and equality in Europe during a panel discussion hosted at the AER pavilion. Vania Freitas, responsible for institutional relations and advocacy at AER intervened in the discussion alongside representatives from the European Trade Union Confederation, European Women’s Lobby and AEGEE – the European Student’s Forum. The panel was also joined by Juan Camilo Roman Estrada, an Icelandic actor and activist of Argentinian origin, whose film Woman at War won the European Parliament Lux Film Prize in 2018. The discussion was moderated by Erica Lee, Event and Communications Coordinator for AER.

Throughout the festival, members of the AER team had the opportunity to speak to local people from Texel as well as holidaymakers visiting the island and participants who had arrived especially from across the EU for the festival. While promoting the AER EU-funded project “Road to the Future” and the “I choose Europe” campaign with JEF, we had the opportunity to meet Commissioner and Spitzenkandidat Margarethe Vestager for a brief chat.

The Eurodyssey programme was of particular interest to many of the young attendees, not only because of the stylish sunglasses that we prepared for the event, but also because of its nature as a wonderful opportunity to afford young people the chance to live and work in another European region. Adriana Andrés i Comas, from the Catalan Public Service of Employment, and Andrés Muñoz Rojo, AER Programmes Coordinator and a former Eurodyssey trainee himself, were on hand to provide answers to the many questions posed about the programme.

Visitors and passers-by alike were curious to see the many different regions of Europe highlighted on the AER regions maps and the AER team members were more than happy to spend time discussing our work on everything from education and e-health through to mobility and cohesion with the many guests who visited us and our EUnicorn at the AER pavilion.

On Saturday morning, AER was delighted to welcome new friends from OPENS 2019, the organisation behind the European Youth Capital 2019 in Novi Sad, Vojvodina, Serbia. The OPENS 2019 team brought great energy and warmth to a snowy morning on Texel as they explained their successful strategy that made Novi Sad this year’s European Youth Capital. Speaking to a full pavilion of interested listeners, they also invited the audience to see Novi Sad for themselves through the means of virtual reality goggles. AER’s Summer Academy will take place this July in Novi Sad so AER members too will soon have the opportunity to learn first hand about the great work OPENS 2019 are doing in the context of the European Youth Capital.

As a network of regions across Europe, AER is proud to have taken part in the Democracy Alive festival and to have had the chance to meet with local people on Texel to discuss issues close to their hearts relating to European affairs and the upcoming European elections. Subsidiarity is at the core of our work and we believe that it is important that discussions about the future of Europe take place not only in Brussels or Strasbourg but in every corner of the continent, every EU member state, every European region.