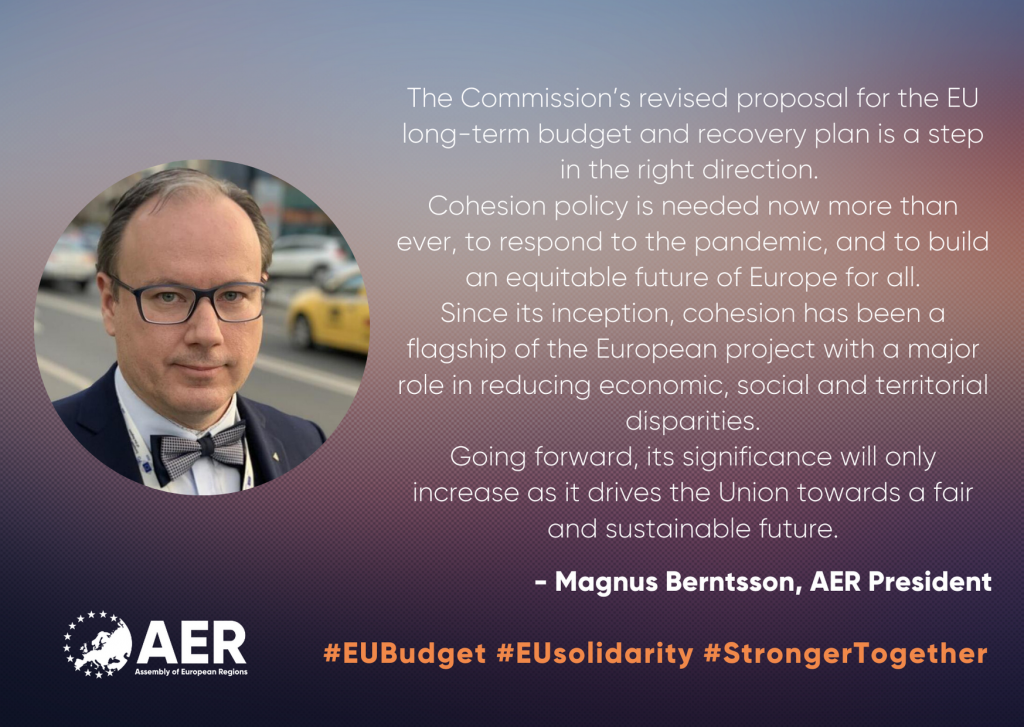 On 27 May, the European Commission published its proposals for the Multiannual Financial Framework (MFF) 2021-2027 and COVID-19 recovery plan.

The next long-term budget of the European Union will be of crucial importance to the European project. Not only will it be delivered in exceptionally challenging times after the COVID-19, but it is also the Union’s first spending plan since the departure of the United Kingdom from the European Union.

AER has produced a ‘Statement on the European Commission Proposal  for the 2021-2027 Multiannual Financial Framework‘ that outlines 10 key points that the European institutions & national governments should take on board.

Among these, AER welcomes the allocation of additional funding to form part of the Recovery Fund to help regions across the EU who have been adversely affected by the COVID-19 virus. This package will help to reboot regional economies, safeguarding jobs and livelihoods for EU citizens.

“Cohesion policy has been instrumental in responding to the pandemic. Its major role of reducing economic, social and territorial disparities in the EU has never been more needed to address the longer-term impacts of the crisis and the challenges that lie ahead, driving the necessary transition towards a green, digital and fair Europe, consistent with the 2030 Agenda and its Sustainable Development Goals.”

In reflecting on the future of cohesion policy within the new MFF, AER stresses the need for principles of partnership, multilevel governance and place-based approach.

As an advocate for more than 150 regions in Europe, AER calls for the meaningful involvement of local and regional authorities in the design and implementation of future EU investment programmes. A fair and inclusive recovery to the crisis, as well as a prosperous Union of future, can only be built with the active participation of all levels of government, acting on behalf of all EU citizens.

Read the Statement in full below:

Photo by bruno neurath-wilson on Unsplash