You are here: Home / About EU Projects / Y-FED: Europe is what we make of it

“Y-Fed – Europe is what we make of it” is a project co-funded by the Erasmus+ Programme of the EU with the aim of bringing the EU closer to its young citizens by developing a proposal for an improved institutional framework of the Union in line with the European Youth Goals (EYGs). The project is intended to foster and strengthen young people’s active citizenship and their participation in the European project.  Young citizens’ are provided with the opportunity to learn about the work of the European institutions, to participate in the design of more representative accountable institutions, as well as to promote the developed model through policy dialogue and political advocacy. Concurrently, Y-FED raises awareness on the  EYGs among both young Europeans and regional and local decision-makers encouraging dialogue between the two actors triggering policy reform and implementation actions at the local and regional levels.

The project is coordinated by JEF Europe, a pan-European, supranational, politically pluralist youth NGO, and supported by 21 partners including  the Assembly of European Regions. The consortium counts:

In recent years, young citizens have shown their interest to be an active part of European political decisions and policies. As clearly shown by the youth’s active participation in the European Elections’ campaign of 2019, young generations want to express their views and be represented in the decision-making processes. At the same time, the importance of promoting an enhanced role of youth within the European Union has been recognized by the Union itself through the definition of the EYGs.

By bringing young people from different backgrounds closer to the European institutions and youth policy, Y-Fed responds to some of the EYGs:

The Y-FED project is structured in two main phases allowing first, to develop and test a model of reformed EU; and secondly, to boost practical know-how relevant to the promotion of the reformed EU institutional model.

In the first phase, young activists will be trained to prepare “Shape Europe” hackathons in 5 European countries.  The hackathons will cover:

During an expert meeting, the outcomes of the hackathons will be reviewed and compiled into recommendations. These outputs will serve as basis to the development of a model of a reformed EU that is closer to its citizens and allows for the effective implementation of the EYGs.

Building on the designed model, the “Y-Fed: Youth Simulation of the European Union” will be run. The simulation is the core of the project and will give young people the opportunity to test the model designed by themselves. Participants will be assigned to different roles, as decision-makers, lobbyists, and journalists.

The second phase of the project focuses on boosting effective lobby and advocacy skills for youth to promote the developed model. Young people will enter the role of advocates for the implementation of the simulation’s outcomes and the EYGs at the local/regional level. All the project’s outputs will be eventually presented during a final event involving youth activists and political stakeholders.

The project started its implementation in January 2020 and will last until July 2021.

Due to the covid-19 pandemic crisis, the implementation of the project was temporarily slowed to comply with the necessary safety measures. As the restrictions have been softened, the project’s activities have been revamped and will conclude as of July 2021.

What is AER’s role and how to get involved?

AER is responsible for the Work Package 4 – Advocacy and lobbying on the local/European level. AER organises trainings for a group of young people to provide them with relevant and applicable skills on how to develop advocacy strategies at both local and European level.

The local and regional advocacy action coordinated by AER will allow their statutory bodies to work directly with young people on local advocacy actions. The aim is to foster impactful exchanges and interactions between the youth that attended the training and policymakers from AER member regions.

AER also contributes to external communication throughout the implementation of the project. 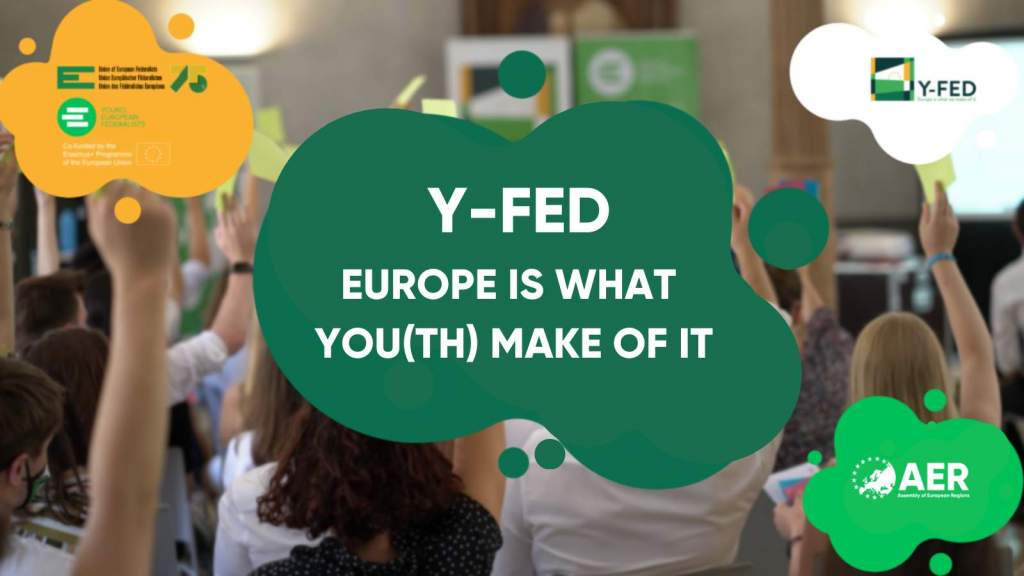 Y-FED: AER Poll Finds Young People are Optimistic About the Future but Lacking Awareness on the CoFoE

Under the scope of the European Project, ‘Y-FED: Europe is what we make of it’, the Assembly of European Regions ...
Read More 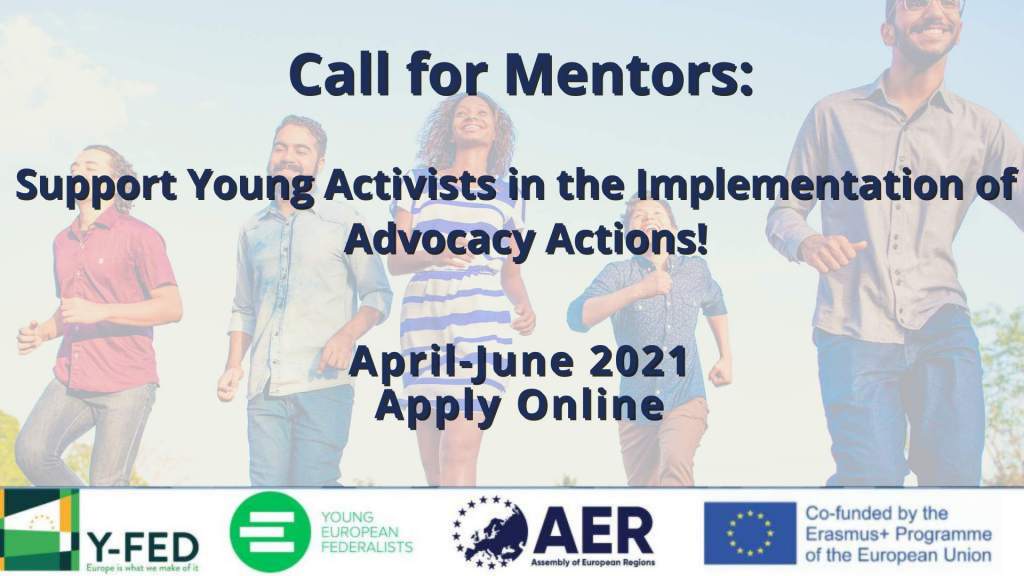 Call for Mentors: Support Young Activists in their Advocacy Actions!

The AER, in cooperation with JEF Europe, are looking for 8 mentors to guide and support 8 groups of young ...
Read More 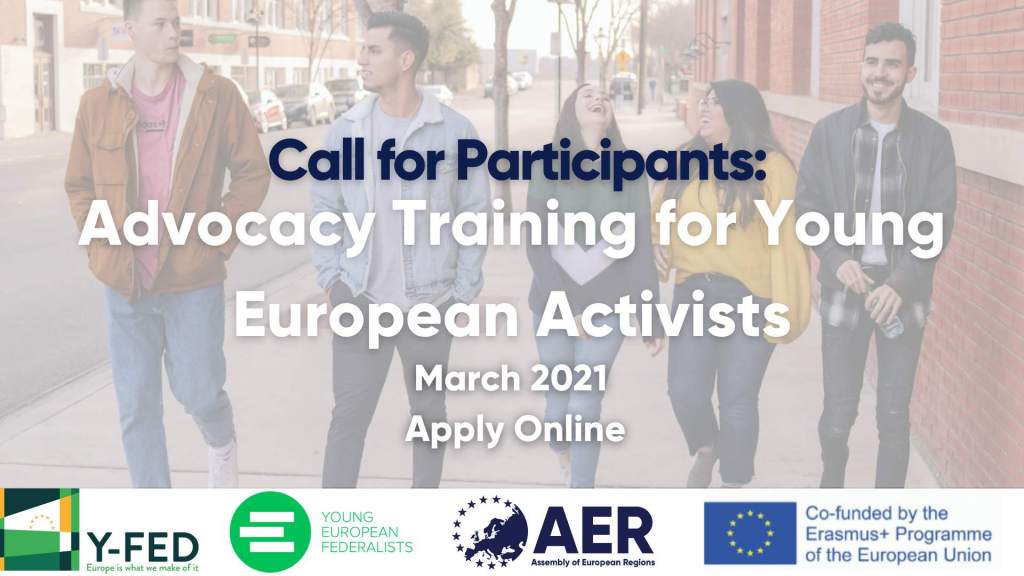 APPLICATION STILL OPEN: The call for participants for the Advocacy Training for Young European Activists organised by the Assembly of ...
Read More 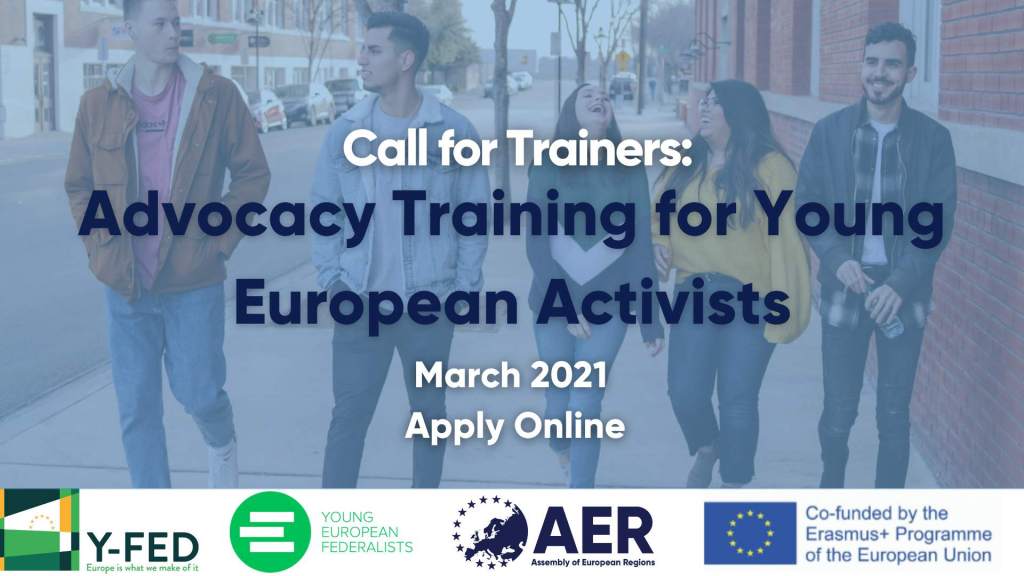 As part of the "Y-FED: Europe is what of make of it" project, The Assembly of European Regions (AER) and ...
Read More