One week after the Brexit, AER President Dr Hande Özsan Bozatli and Secretary General Mathieu Mori met with Mr Timmermans, first vice President of the European Commission. The aim of the meeting was to discuss the 2017 work programme of the European Commission but also to enquire about the steps the Commission will take following the loss of one of the key EU members. After restating the key AER messages on current key topics such as renewal of cohesion policy, urban agenda while also calling for the Commission to produce a white paper on rural areas that would lead to a post-2020 rural development policy. The implementation of the European fund for strategic investment as well the future of asylum policy where also raised.
AER regretted that no strong signals in favour of a broad debate on the future of the European Union were given after the European Council that finished a few hours before our meeting with Mr Timmermans. AER is ready to take part in this needed debate, by brining forward ideas from its member regions.
Many questions still pending that will need a follow up with the European Commission over the next months.

Following this meeting, the AER President and Secretary General, accompanied by Laurent of Belgium, special adviser to the President met with Mr Markku Markkula, President of the Committee of the Regions. The meeting was the occasion to restate the good cooperation between AER and the CoR. The CoR was encouraged to make the most of the trusted partner that is AER, especially when it tries to reach out to non-EU members. Given the profile of AER membership and of AER President, there are many formal and informal links that can be put in place to work towards a more inclusive Europe. 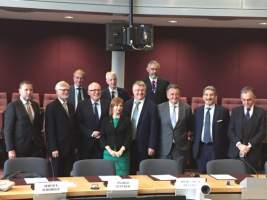 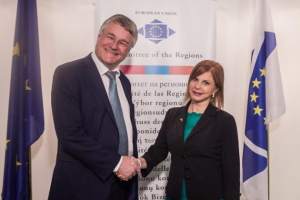