During the joint plenaries delegates had the opportunity to participate in 2 workshops aimed at identifying project ideas, topics for good practices and lobbying activities to be carried out within the network. The workshops were also an opportunity to share information about upcoming EU calls for projects.

Youth empowerment for a sustainable Europe

Sharing experiences: the case of Izmir

After a presentation on the development of youth training in the Izmir Peninsula,

where several initiatives have been implemented to ensure young people are trained, remain in the area and valorise its cultural heritage, delegates were informed about the awareness raising and engagement efforts of the region in terms of European affairs and relations. Quite interestingly in order to increase knowledge about opportunities, the department of EU affairs organises information events in less advantaged areas because young people of these areas will generally not seek information about Europe.

Delegates then worked in two groups, one focused on projects and good practice sharing and the other one on lobbying with AER

Based on the Logical Framework (Logframe) Matrix, presented by Agnese Pantaloni, AER Coordinator for European projects and partnerships, participants shared the challenges their regions face in terms of youth policies. The Logframe Matrix enables to outline the key features that lead to a project achieving its goal, with challenges as a starting point. 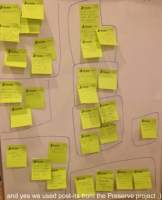 Identified challenges range from unemployment, heavy reliance on parental support, drug abuse, lack of interest or lack of education, to early marriage or teenage pregnancy, domestic violence or intolerance and racism. One issue which was consistently mentioned by regions, despite very diverse economic and social backgrounds, was mental health of young people.

Participants therefore decided to concentrate their actions around the following main problem: the difficulty for young people to relate to others. (disclaimer: representatives did not at any point suggest that this problem was limited to young people. Rather as policy makers in charge of youth policies they identified this as being the main problem for the policy area they are dealing with).

The region of Norrbotten decided to take the lead on this topic and organise the experience sharing. Members may at a later stage decide to enter in an interregional project.

Looking back on the many high level meetings AER organised this year with AER members, Alexandre Brecx, AER Coordinator for Institutional affairs and membership, explained how regions can take advantage of the network to also raise their own regional issues towards the European institutions. Typically this was the case on the occasion of the meeting with EC Commissioner Karmenu Vella or the meetings with Commissioner Andrus Ansip, First Vice president Frans Timmermans or COR President Markku Markkula or on the occasion of events where AER members act as ambassadors for the network. A network is a place to give and retrieve, member regions, which engage in AER lobbying activities directly benefit from it.

When regions want to initiate a major lobbying action, they can also turn to AER for support. This was the case for instance for Lower Austria: representatives from the region were informed that Cohesion Policy may not be continued post 2020, they herefore decided to reiterate an initiative they had successfully carried out in 2011 to gather regions in a common position for the continuation of Cohesion Policy, which is a major support for regional development. Under the leadership of Lower Austria (At) and the Assembly of European Regions, 337 political representatives of regions from 22 member states (71,5% % of EU population) and 5 interregional organisations signed a common declaration to demand the continuation of a EU Cohesion Policy for all regions after 2020. AER President Dr Hande Özsan Bozatli and Vice-President Treasurer Mr Magnus Berntsson represented AER member regions in this high level event.

In the framework of the Committee 1 activities on mobility, rural development and energy, this workshop aimed at identifying ideas for joint actions. Indeed the 3 topics, which are often discussed separately within working groups, are connected in many ways. This was for instance highlighted in the Backgård report on energy security as well as in the work on the circular economy. In the context of a general conference which looked at how sustainable mobility affected many policy areas, members had the opportunity to explore synergies in this workshop.

Participants shared their main concerns in these areas, which go from building material and insulation to integrating a circular economy perspective in industry but also increasing the connectivity of regions, making them more attractive for professionals, improving the sustainability of transport choices in the public sector, shifting from high reliance on coal to healthier and more sustainable energy choices.

The issue of increasing the regional attractiveness was identified as a the main objective, and the main focus to address this at present will be improved and sustainable connectivity. Because policy learning is key in this regard members could take advantage of the Horizon 2020 call EE-09-2016-2017 “Engaging and activating public authorities” which deadline is 7th June 2017