You are here: Home / Events / Wrap-up: Highlights of the AER Autumn Bureau 2022 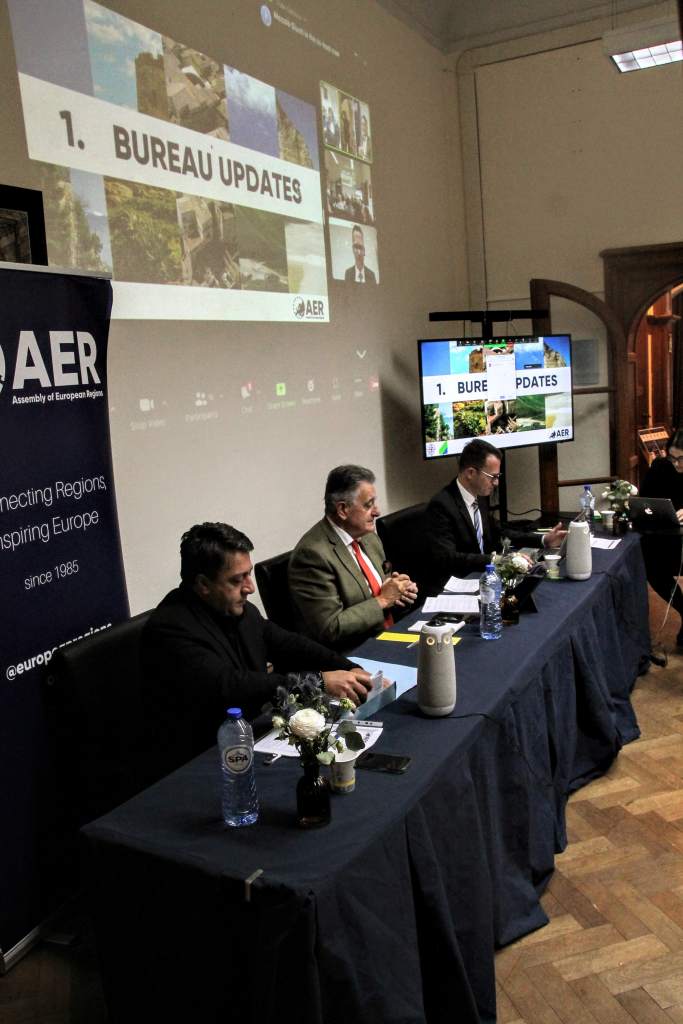 On 6 and 7 December 2022, AER convened its Autumn Bureau at the Abruzzo EU Regional Office in partnership with the Autonomous Government of Sardinia. It was an opportunity to highlight the 2022 achievements and discuss AER political priorities for 2023.

On 6 December, the AER Autumn Bureau opened with a welcome reception celebrating the tradition and heritage of Abruzzo and Sardinia, the Italian regions co-hosting the Bureau. Participants could taste Sardinian wines and food while enjoying a permanent art exhibition of artists from Abruzzo.

Later in the evening, regional heritage had an actual voice with the live classical music performance of Italian artists who sang about local legends of Abruzzo and Sardinia and recited poems in regional dialects. The artists were Tania Di Giorgio (soprano), Adele Filomena (photographer), Tonia Filomena (reader), and Desiree Infascelli (accordion).

On the 7th of December, the Autumn Bureau started with the presentation of updates about the AER advocacy work in 2022 by Vice-President Jean-Luc Vanraes. From the Conference on the Future of Europe to the Cohesion Alliance, to the Alliance for the Reconstruction of Ukraine, the AER joined high-level advocacy initiatives to strengthen the governance of regional authorities within and outside the EU and the Council of Europe, especially for what concerns humanitarian and political support to Ukraine.

Vice-President Vanraes also highlighted the successful work of Bureau Task Forces on Democracy (read HERE) and on Sustainable Mobility and Connectivity (read HERE) which were discussed and approved during the Spring Bureau meeting in March 2022.

The floor then passed to Adil Murat Val, Adana (TR), a member of the Task Force on Jobs, Growth and Investment, who presented the relevant draft position paper expressing AER recommendations on the post-COVID economic recovery.

The paper emphasises the need for jobs-driven economic growth allowing the labour force to up-skill its competencies to participate in the digital and green transition. It also calls upon European governments and Institutions to further invest in local and regional digital infrastructure and consequently enable Small and Medium Enterprises to access easily international markets (read more HERE).

Shortly after, Mícheál Ó hÉanaigh, AER Vice President for Youth, Culture and for Tourism, presented the draft AER position paper on Youth. The paper acknowledges the diversity of the group “youth”, and addresses the lack of access to affordable housing, employment opportunities, lifelong learning, and involvement in policy-making and community spaces (read more HERE).

Both papers were approved by Bureau members.

After the approval of the position papers, the Autumn Bureau zoomed in on the issue of up-skilling digital competences and the future of work with a workshop attended by Sebastiano Toffaletti, Secretary General of European Digital SMEs Alliance, Lucrezia Ioannoni Fiore, Policy Assistant at Directorate-General for Employment, Social Affairs & Inclusion (European Commission), Massimo Temussi, Managing Director, Region of Sardinia, and Leo Grassi, Senior EU Affairs Officers of Abruzzo region.

During the workshop, panellists identified the main challenges ahead of the digital transition in European regions. For example, Toffaletti (European Digital SMEs Alliance) brought up the challenge of ensuring an acceptable degree of replicability of innovative initiatives, which often start off within large companies from wealthy metropolitan areas. To be socially relevant, groundbreaking initiatives need to be replicable by actors such as SMEs.

Toffaletti (European Digital SMEs Alliance) brought up the challenge of ensuring an acceptable degree of replicability of innovative initiatives, which often start off within large companies from wealthy metropolitan areas.

The conversation touched upon also examples of best practices. Ioannoni Fiore brought the example of ALMA, an EU-funded mobility scheme for young jobseekers that aims to empower the most disadvantaged NEETs ( young people neither in employment nor in education or training).

On the regions’ side, Temussi of the Sardinia region talked about the different components of the future of work, mentioning the transition from gig economy to a passion economy, where earnings are less predictable and there is a wide range of options for a single digital service (Read here his presentation). Grassi from Abruzzo described the ongoing process of smart specialisation of Abruzzo’s regional public administration, a transition that aims to improve its accessibility to citizens and businesses. (Read here his presentation)

The AER Bureau proceeded with a discussion on political priorities for 2023. As announced during the State of the Union speech in September 2022, 2023 will be the European Year of Skills, and AER’s multiple workstreams put it in the position to develop meaningful contributions for different policy fields. To ensure a meaningful contribution, the Bureau approved the continuation of the work of the Task Forces on Youth, Jobs, Growth and Investment, and Tourism.

2023 will be the European Year of Skills. AER’s multiple workstreams put it in the position to develop meaningful contributions for different policy fields.

Their output and knowledge will help structure the work of two new Task Forces focusing on the Future of Work and on Active Citizenship. The first will explore how remote working can create benefits for rural areas, addressing the divide between urban and remote regions and reverting the brain drain. The second will capitalise on the public awareness fuelled by the Conference on the Future of Europe and reflect on how regions can contribute to the development of new forms of deliberative democracy.

Should these topics be of interest to your region, you may want to read more about the objectives of these new Taskforces and how to join their work.

After approving the set-up of two new Task Forces, Bureau members discussed the possibility of an AER engagement on the topic of mental health. To ensure meaningful work, members agreed that it should be mainstreamed as a cross-cutting aspect to be included in the upcoming position papers and work of the Task Forces.

Sustainable, local and smart: the tourism of tomorrow

The Bureau Debate on Sustainable Tourism concluded the Autumn Bureau 2022. The pandemic shrunk the revenues and resources of the tourism sector, pushing it to rethink its business model. During the Bureau debate, Anne Von Zukowski from DG GROW and Tim Fairhurst of the European Tourism Association offered the perspective of EU institutions (presentation HERE) and the private sector on how to consolidate the recovery of a vital sector for regional economies.

The commitment of the Catalonian government to a new model of tourism is transversal, transformative and transitional.

As noted by Marta Domènech Tomàs, tourism must be the solution, not the problem. During the panel, Domènech Tomàs described how Catalonia is committed to a systematic transition on three levels.

The commitment of the Catalonian government to a new model of tourism is transversal, transformative and transitional. This means that tourism has to be connected to other economic sectors, undergo a systematic transformation and facilitate the transition to new and sustainable economic models.

As reiterated by the Autumn Bureau, the voice of AER is the voice of its members. So are its actions. If the topics of remote working in rural areas and fostering active participation trigger your interest, discover here how to join the new AER task forces.