You are here: Home / Projects / Ongoing projects / Together4Cohesion: Responding to the challenges of communicating cohesion policy. 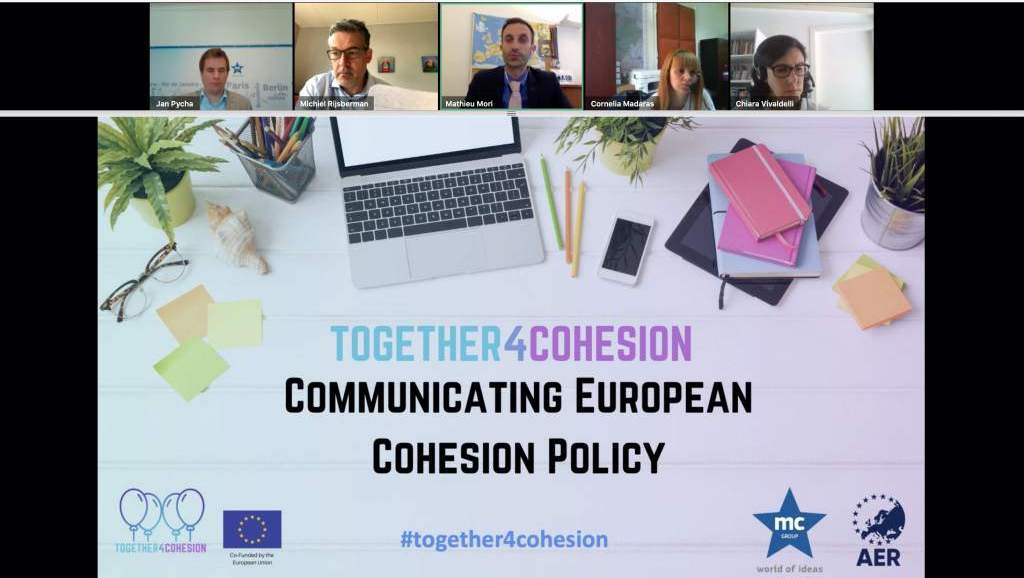 The final conference of “Together for Cohesion: Let’s rEUnite!” took place online on 16 June 2020. The webinar gathered 115 participants including policymakers at various levels of government, project managers and various other stakeholders all involved in the implementation of cohesion activities and willing to learn more about its communication.

The attendees had the opportunity to acquire or strengthen their knowledge about cohesion policy, including insights on the next programming period, as well as on how to effectively communicate its actions and benefits.

Started in April 2019, the Together for Cohesion project will soon reach its end. AER, in cooperation with mc Group, have been actively engaged in communicating about European cohesion policy and its benefits through an active communication campaign which included, among the main activities, a dedicated cohesion calendar, workshops, training, and wide media coverage.

Enriched by these experiences and learning opportunities, the webinar was a chance to share what has been learned during the project, as well as to gather new insights on how to communicate about cohesion policy that can be applied by all actors engaged in similar activities. A highly diversified panel of experts involving politicians, regional practitioners, commission officials, and communication experts from across Europe shared their insights and experiences on the subject.

The webinar was moderated by Mr Mathieu Mori, AER Secretary-General.

The discussion was launched by the enlightening words of Mr Michiel Rijsberman, Regional Minister from Flevoland & Chair of the AER Task Force on Cohesion Policy. The speech emphasised the importance of cooperation in order to communicate cohesion policy. Accordingly, cooperation among EU countries, but also among European institutions, can play a key role to counter Euroscepticism and other threats affecting communication. In this sense, the Together4Cohesion campaign has been a meaningful push in spreading the benefits of cohesion policy.

The discussion continued with the presentation of Mr Jan Pycha, expert of communication and Senior Project manager at mc Group. Given his broad expertise in the field of effective communication strategies, he shared relevant tips on how to communicate challenging and abstract topics, as cohesion policy. Abstract topics pose a challenge to communication in that they can be usually difficult to understand by a non-technical audience. To overcome these difficulties, it is relevant to first ask friends, colleagues external to the topic, and to prioritize and simplify the communication.

General theory and hints were followed by concrete examples and practical know-how from two of the regions participating in Together for Cohesion. First, Ms Chiara Vivaldelli, European Project Manager at the Province of Trento, and representative of the Province for the project Together for Cohesion shared difficulties and successes in informing citizens about cohesion policy. She explained that one of the main challenges is the distance that the citizens can feel between them and the European institutions. Nonetheless, through a series of effective examples, she showed how regional authorities can play a pivotal role in lowering this perceived gap. Then, Ms Cornelia Carmen Madaras, Advisor at the Foreign Affairs Office of the Alba County Council, and representative of the County for the project Together for Cohesion shared her experiences with partnership and its importance and implementation in the communication of cohesion policy. She explained that partnerships allowed for better access to knowledge and the sharing of best practices in their contribution to a common goal.

Finally, Ms Diego Villalba de Miguel, Deputy Head of the Communication Unit of DG-REGIO European Commission presented the citizens’ knowledge of the policy and the current and future use of cohesion policy funds. His presentation shields light on how cohesion funds have been deployed to respond to the current COVID-19 crisis, as well as the perspective of the next budget. Before the conclusion from Mr Mathieu Mori, a fruitful Q&A session was held during which the audience could ask questions via the platform to all the panellists.

All presentations are available in the follow-up article on Together4Cohesion website!

Stay tuned, for those of you who missed the webinar or would like to have a sustainable takeover of the lessons shared, we will soon circulate an e-learning video summarising the inputs of the webinar!

Lastly, in the coming weeks, more activities will be organised by the regions involved in the project:

We invite you to check out our Cohesion Calendar to be updated on upcoming events! You can also have a look at the success stories gathered from projects funded by the Cohesion policy around Europe.