You are here: Home / Archives for Mediterranean

This is the tag for all posts relating to Mediterranean. 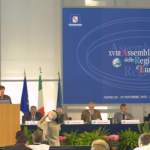 Naples (Campania), 29 November 2002 Liese Prokop, Vice-Minister President of Niederösterreich (Austria), was re-elected President of the Assembly of European Regions for a two year mandate. During President Prokop’s first mandate she remained particularly committed to the development of cooperation between the European interregional organisations, particularly in the context … END_OF_DOCUMENT_TOKEN_TO_BE_REPLACED

Headlines: The Regions play an important role in promoting Employment Help for SMEs First steps towards decentralisation in Great Britain The Amsterdam Treaty >Ratification in progress 350 years of the Treaty of Westphalia East-West Cooperation >Preparing the regions for EU enlargement Social and employment affairs >The need for interregional … END_OF_DOCUMENT_TOKEN_TO_BE_REPLACED