You are here: Home / Uncategorised / Regions at the core of the European Green Deal 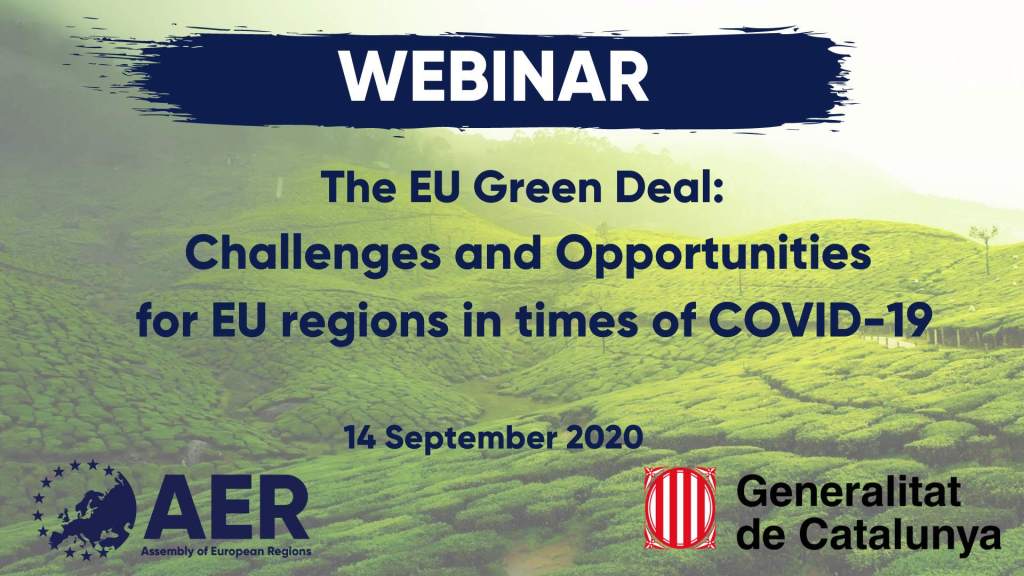 The first AER series of webinars on European Green Deal in collaboration with the Advisory Council for Sustainable Development of the Catalan Government (CADS) was launched on 14 September. During the online session entitled EU Green Deal: Challenges and Opportunities for EU regions in times of COVID-19, it was discussed the key role that the European Green Deal and its Just Transition Mechanism will play in building more resilience and economic recovery to tackle the consequences that will be confronted by European regions in a post-COVID-19 era.

For this occasion, the more than one-hundred participants enjoyed the presence of experts working on the ground and implementing the new EU growth strategy from different perspectives. In this regard, the panel was composed by an institutional representative, Peter Berkowitz, Head of Unit of the Smart and Sustainable Growth department from the Directorate-General for Regional and Urban Policy European Commission. Representing the regional perspective: the Secretary for Vicepresidency and Economy from the Government of Catalonia, and AER Vicepresident for Sustainability, Albert Castellanos; and Iris Flacco, Director of the Energy Department from the Italian region of Abruzzo. And representing the Institute for European Environmental Policy (IEEP), Céline Charveriat, Executive Director.

The online session moderated by Arnau Queralt, Director of the Advisory Council for Sustainable Development of Catalonia and chair of the European network of Environment and Sustainable Development Advisory Councils (EEAC), started with an introduction of the new EU growth strategy by the hand of Albert Castellanos. The AER Vicepresident for Sustainability highlighted the key role that the European Green Deal will play in supporting European regions recovering from the economic crisis as a result of the pandemic, for instance, as Castellanos reiterated and also brought up by Céline Charveriat later on the debate, this EU growth strategy should not be seen as a contradiction to the COVID-19 crisis, but as a new framework and opportunity for regional governments to bring at the top of their priorities the green and sustainable transition.

Albert Castellanos highlighted the relevance of placing regional administrations at the core of the EU recovery, regions and cities are closer to the citizens than national governments, and therefore can address and understand the needs of their citizens better. He also reminded that most European regions have key competencies that play an important role in the recovery, such as health, social care, and research and development.

The Head of Unit from the Directorate-General for Regional and Urban Policy (DG REGIO) from the European Commission, Peter Berkowitz, explained that the European Green Deal has been created as a new framework for linking economy and climate environmental goals, and therefore it should be placed at the centre of the EU recovery plan and co-finance the green transformation. At DG REGIO are strong advocators of involving territorial and regional levels in the so-called sustainability transitions and putting into practice the main idea from the Just Transition Mechanism: leaving no region behind on the transformation planned.

Peter Berkowitz also mentioned the relevance of placing cohesion policy at the heart of the green transition in order to deliver on the targets set by the European Green Deal from a territorial and regional approach. The main idea is to put into place the right mechanisms to govern this transition, and by governance meaning the right actors that are aware of their capabilities to deliver on a fair and sustainable way. There is a strong capability to use the fund for this transformation and the right governance to engage all the needed actors on this process. He agreed that this will be a big challenge, although also a big opportunity, that can only be achieved by joining efforts from all levels of governance.

The Executive Director of the Institute of European Environmental Policy (IEEP) added to the debate a tone of reality when she remembered to the audience and the panellists that this pandemic has only aggravated an already existing problem at the European Union concerning inequality between European regions and countries, and most governments were far beyond from achieving the previously established environmental goals. Therefore, Céline Charveriat called to address the three main challenges ensuring intra-country and intra-generational equity. She asked to harness the green deal and green recovery for greater cohesion and solidarity, establishing a new contract between rich and poor regions and regaining the lost terrain by this crisis in becoming more sustainable and fair.

Iris Flacco, representing the Government of Regione dall’Abruzzo (IT), highlighted the important role that regions and cities, such as in Abruzzo, played during the last months, being at the front line, directing all the efforts to protect the health and welfare of citizens, which led to leaving aside for a while environmental and climatic ambitions. However, in line with the representative from DG REGIO, she agreed that the European Green Deal has to be at the core of the recovery, and regions must put into practice measures as soon as possible. Regional governments must promote sustainable mobility measures, invest in the digitization and accessibility to all the people of a stable and fast Internet network. The region of Abruzzo, in order to face the resulting crisis from the pandemic, has developed strategies to address the energetic and climate issues by identifying the projects immediately applicable and relevant financing lines.

Interesting questions were raised by the more than one-hundred participants, for instance, the relationship between 2030 Agenda and the Green Deal. Peter Berkowitz responded with a reminder: “the 2030 Agenda it’s like the structure of a building, it’s integrated into most strategies and initiatives but you can not see it”, therefore, the goal of the European Green Deal is to deliver and make progress on achieving the Sustainable Development Goals.

As concluding remarks, Albert Castellanos highlighted that is key to understand the link between economic growth sustainability and the achievement of environmental challenges. And closed the debate stating the relevance of involving regions in the implementation of the European Green Deal.

For further inputs or in case you missed it out, watch the video now!

Future related events to this topic: