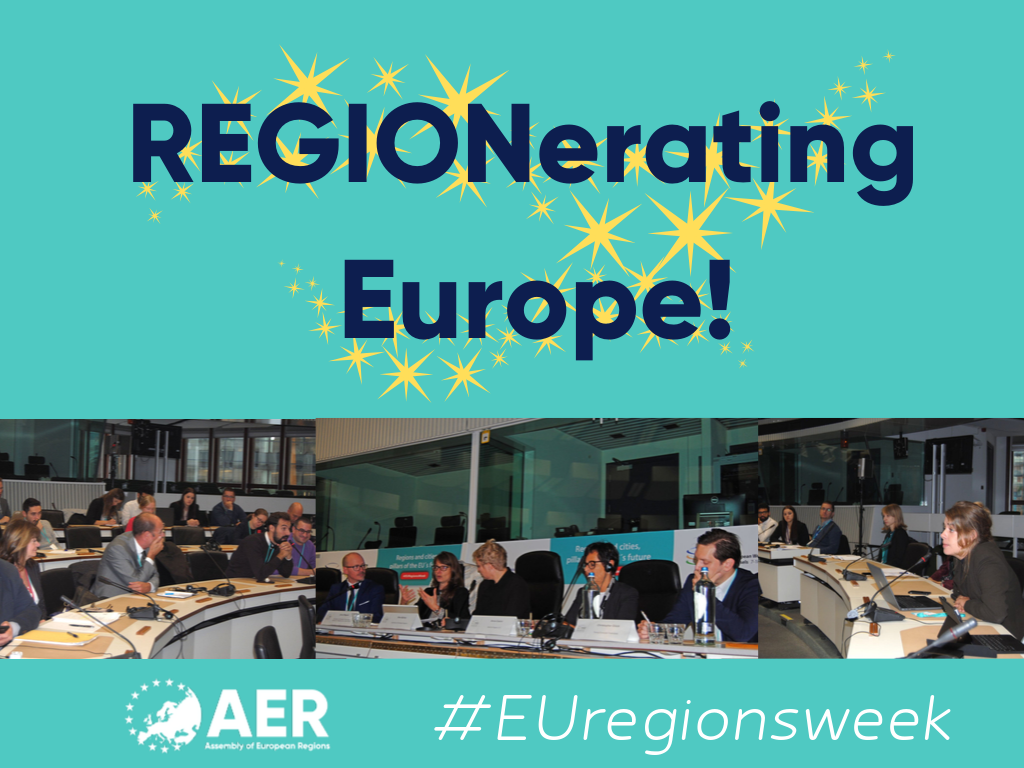 As part of the European Week of Regions and Cities, AER hosted an event entitled “REGIONerating Europe” focusing on the role regions can play in regenerating the European Project as well as how citizens in the regions of Europe benefit from EU membership through Cohesion Policy, structural and development funds.

The European Week of Regions and Cities is an annual four-day event during which cities and regions showcase their capacity to create growth and jobs, implement European Union cohesion policy, and prove the importance of the local and regional level for good European governance.

The timing of this event was particularly pertinent given that new European Parliament has recently been elected and a new Commission is currently being formed.

The goal of the workshop, moderated by AER Vice-President for Democracy, Nina Björby, was to stimulate debate around key challenges facing the EU today and how regions can help to create a more democratic, inclusive and sustainable Europe.

Speaking on the value of cohesion policy and its uses, Anna Wagner, Deputy Head of Unit of the European Commission’s DG Regio stressed the importance of the partnership principle as well as the territorial dimension of cohesion policy. She welcomed the emphasis on a territorial approach and the move away from looking at cohesion purely through a sectoral lens.

Anna Casini, Vice President of the Marche Region, Italy, intervened on the subject of subsidiarity and called for a common language and common narrative when communicating on European affairs. Instead of ‘subsidiarity’, we should speak about a Europe closer to citizens.

Ms Casini gave examples from the Marche Region on how Rural Development Funding has been employed both to increase awareness about the EU’s support to regional development in rural areas and also to tackle knock-on effects of climate change. She underlined that addressing climate change is not just a matter of ethics, but also economics, citing the example of viticultural harvests which have been destroyed as a result of drought or floods in her region. Access to European funding can help to offset dramatic consequences for local farmers, businesses and supply chains in Europe’s regions.

Thomas Andersson, AER member and Rapporteur on ‘Partnership between civil society and local and regional levels’ of the Congress of Local and Regional Authorities of the Council of Europe, spoke about threats to democracy faced by the existing gap between institutions, citizens and civil society. He outlined the work done by the CoE Congress in cataloguing methods to improve citizens’ engagement and told the participants about an upcoming toolkit which, when published, will be an excellent resource for all local and regional authorities wishing to further the involvement of citizens in multilevel governance and European affairs.

Mr Andersson, too, asserted the importance of avoiding “top-down” approaches to communicating on European affairs, favouring instead the empowerment of individuals and groups to speak up and make their needs known.

Christopher Glück, President of the Young European Federalists (JEF), continued this thread, outlining the work done by JEF and AER on the EU-funded project “Road to the Future“, which involved a bus tour across the EU in advance of the 2019 European Parliament elections to engage young people and encourage them to get out and vote.

Mr. Glück shared his experiences of speaking to young Europeans across the continent, in both capital cities and more remote areas, and told of a feeling of lost trust in democracy and scepticism towards the European Union, partly as a result of disinformation. He concluded by providing concrete examples of how Europe’s local and regional leaders can counter this trend; by making changes that inspire hope in the European project, by tackling disinformation through education & media scrutiny, and speaking openly and passionately about the many advantages of European Union membership, including the positive impact Cohesion Policy has on citizens’ everyday lives.

Cohesion Policy is a central element of AER’s work. Within the Bureau, we have an active Task Force on Cohesion. In addition, we are currently leading an EU-funded project “Together4Cohesion” on communicating cohesion policy in the regions of Europe.

If you would like to learn more about either of these initiatives, please do not hesitate to contact the AER secretariat.