You are here: Home / News / New AER survey sheds light on expectations of citizens, trust in governments, and gender equality 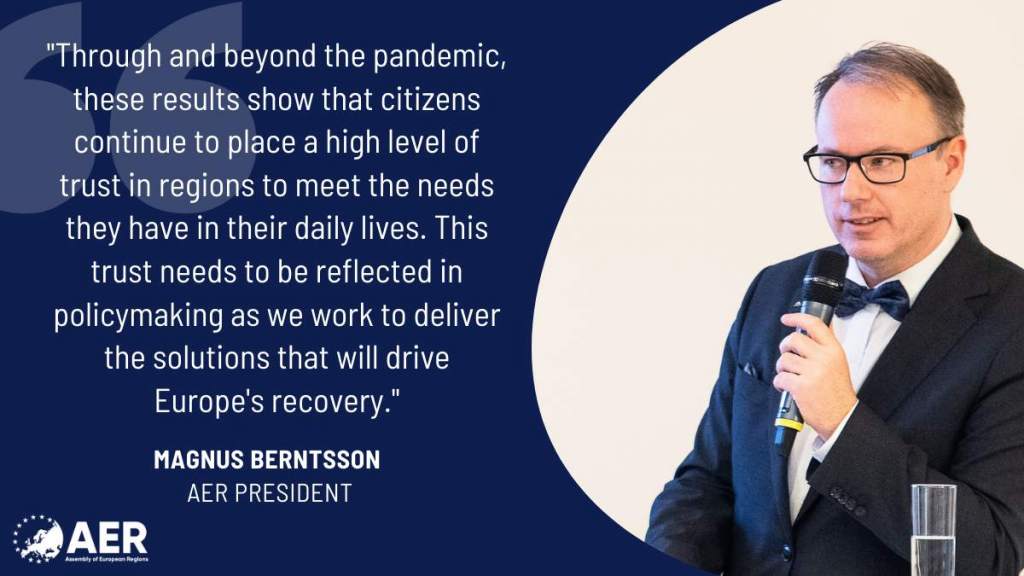 What are the priorities for citizens as Europe recovers from the pandemic? How much do they trust European, national and regional governments to solve the issues that matter to them? How many have heard of the Conference on the Future of Europe?

These were some of the questions the AER put to 6,291 EU citizens as part of a survey across six countries, representing approximately 60% of the EU’s population: Germany, France, Italy, Poland, Sweden and Romania. Conducted in June in collaboration with Savanta as part of the Y-FED Project, this representative survey sheds light on the shifting social, economic and political priorities of Europeans as they look beyond the COVID-19 pandemic.

So what did we learn? Below are a selection of some of our key takeaways from the questions we asked.

The COVID-19 pandemic put all Europeans and all levels of governments under enormous pressure. So how has the pandemic impacted citizens’ trust in their politicians? We asked respondents “to what extent do you trust or distrust each of the following levels of government to respond effectively to the issues that affect your life?” Our survey found that regions enjoy the highest level of trust, with more than half (52%)* indicating that they “somewhat” or “greatly trust” the regional and local governments where they live. This was followed by the European institutions (49%), with national governments at the lowest level (41%).

In the case of the EU institutions and regional local governments, the biggest group said the pandemic has made “no difference” to their level of trust (38% and 42% respectively). On the other hand, the majority of respondents (38%) said that the pandemic had decreased their level of trust in the national government of the country where they live.

Responding to these figures, which are encouraging for regional governments, AER President, Magnus Berntsson said “Through and beyond the pandemic, these results show that citizens continue to place a high level of trust in regions to meet the needs they have in their daily lives. This trust needs to be reflected in policymaking as we work to deliver the solutions that will drive Europe’s recovery.”

What are citizens’ priorities for the Recovery?

Europe is slowly emerging from the pandemic and moving towards recovery. But what do citizens think are the key areas of concern to citizens that policymakers should address?

We posed the question, ‘Thinking about priorities for the lives of citizens in the region where you live, in which areas does your region most urgently need progress?‘ Choosing a number of answers from a list of thirteen options we provided,** respondents were given the chance to set out their priorities for recovery in their region.

Perhaps unsurprisingly in the wake of a pandemic, the two areas most respondents identified as needing urgent progress were “economic development and jobs” (37%) followed by “healthcare” (36%).

Interestingly, they also indicated that “perspectives for the youth” (31%) and “education” (25%) should be a priority. Young people have been one of the groups most affected by the pandemic, and this underlines the need for policymakers to put Europe’s young people at the heart of the recovery as we move towards 2022, the European Year of Youth. As part of our Y-FED project, we also broke down what respondents between the ages of 18-34 make of these and other questions on the future of Europe. We will be releasing key findings on young people’s opinions in the coming weeks — so keep an eye on our website!

How aware are Europeans of the Conference on the Future of Europe?

With the Conference on the Future of Europe well underway, how aware are citizens of it in the six countries that we polled?

This is indicative of the scale of the challenge EU institutions face when it comes to reaching European citizens. As the level of government closest to citizens, these results underline the need for support from the local and regional level to act as an interlocutor between our villages, towns and cities and the European level, as set out in the AER’s Recommendations on the Conference on the Future of Europe.

How good or bad is the situation in Europe with regard to Gender Equality?

Respondents were also asked their views with regard to gender equality, “Thinking about equal rights and opportunities for women in your region, to what extent would you say that the current situation is good or bad…” in the fields of “opportunities to participate in society and politics”.

Answers were gathered into three groups: those who said that the situation in their region is “Very good” or Quite good”, “Average”, “Very bad” or “Quite bad”.

Of course, it is worth comparing perspectives on this question on the basis of gender. The majority of respondents of either gender said the situation was “Average” (41%) with a slightly higher percentage for women (43%) than men (40%).

When it comes to the individual countries, the most optimistic country is Sweden followed by Poland. 35% of Swedes believe the situation is “Quite good” or “Very good”, followed by Poland and Germany at 33%***.

* Note: percentages have been rounded up or down to the nearest whole number. A more detailed breakdown is available upon request by contacting Communications & Events Manager, Justin Sammon at [email protected]