This ceremony, chaired by Sonja Steen, outgoing President of the AER Committee for Culture, Youth and Education, highlighted the efforts region make to become more youth-friendly territories. Youth participation and inclusion are very high on the AER agenda and the award is a way of raising awareness on this topic while shining a light on successful and transferable examples in the regions.

…And the winner is

Jury Members unanimously awarded the MYFER award to Vojvodina (SRB) for their project on sex and relationship education for high school students.

The MYFER Special Prize went to Catalonia (ESP) for its tailor-made Youth Guarantee programme which combats early school leaving and increase the employability of Young people not in education, employment or training.

The MYFER Jury gathered on 16 May 2017 in Brussels and was composed of representatives from the AER Youth Regional Network, Eurochild, the European Youth Forum (EYF), the European Youth Parliament (EYP), and the Advisory Council on Youth of the Council of Europe Youth Department.Evaluation criteria include aspects such as sustainability, equal opportunities, social inclusion and gender equality as well as the impact of the initiative in the region and the role played by youth in its implementation and development.

Evaluation criteria include aspects such as sustainability, equal opportunities, social inclusion and gender equality as well as the impact of the initiative in the region and the role played by youth in its implementation and development. 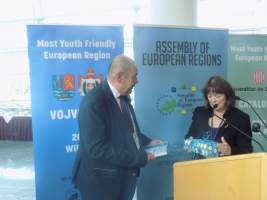 Vojvodina: a holistic approach for healthy sex and relationships

This project started in 2013, after a survey of high school students returned alarming results indicating poor knowledge among sexually active teenagers. As regular school curricula in the country do not include sex education the region took action and implemented an extra-curricular programme for students.

Young people are not mere beneficiaries: they are engaged and empowered to be actors of change: 30% of trainers are indeed peer trainers, enabling young people to be both recipients and providers of support.

This highly transferable initiative started with a pilot project for 10 schools. 2 years later it already involved 77 schools across the region. In total 150 trainers were trained, ensuring sustainability and long term impact.  After 3 years, 11865 young people from all over the region have been empowered through this action, for healthy sex and relationships.

Confronted with the daunting task to curb a 48.9% unemployment rate for young people under 25 in 2013, this region developed its own Youth Guarantee model based on social innovation, with two highly successful programmes.

The “Unique” programme focuses on increasing employability. Major landmarks of this programme are the training activities outside the classroom, the work on transversal competencies and the ongoing tutoring.

Youth from very diverse backgrounds, at risk of exclusion or with higher education, receive customised support for training, employment or to set up their own business. The close cooperation with local social and economic stakeholders from an early stage prove instrumental in supporting the youth and bringing innovation to the local economy.

Moreover, specific actions are being carried out for youths with functional diversity and over 660 youths with disabilities are being hired at special employment centres.

The unemployment rate dropped by 16,6% in 3 years. Over 42700 young people have participated in one of these two programmes, and 19,940 are currently working.

MYFER: snapshots of a Beautiful Europe

“Every second year the MYFER award enables AER to seize a picture of how regions build a progressive Europe with and for youth. While the two winning regions are particularly in the spotlight, all participants presented inspiring examples of how to make regions youth-friendly” says Sonja Steen, whose region organised the award this year and who was also the Chair of the Jury.

Each participating region received a detailed feedback on major assets and elements which can be further improved from the Jury members. These examples will be highlighted via the AER website to continue to disseminate good practices and encourage other regions to import successful ideas.

Moreover, the AER Youth Regional Network will be involved in the development of the upcoming edition of the MYFER award, because AER takes youth seriously.