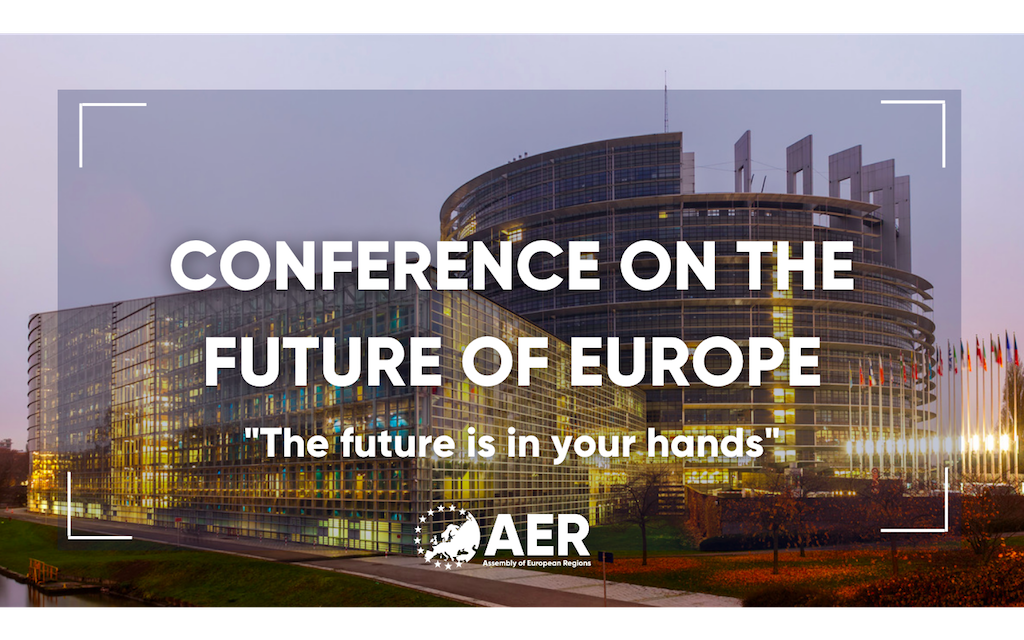 Today on Europe Day, the Conference on the Future of Europe ends.

This Conference was a citizen-led series of debates and discussions to enable people from across Europe to share their ideas and help shape our common future. The Conference, as a major pan-European democratic exercise, was the first of its kind and gave European citizens the great opportunity to debate Europe’s challenges and priorities for the years to come. In other words: how to make the Union fit for the 21st century’s next challenges?

The current situation at Europe’s doorstep shows us once again the importance of European cohesion and solidarity between all levels of government. Since 2021, hand-in-hand with other associations and civil society organisations working on the field of youth representation, democracy, and good governance, the AER has endorsed a series of recommendations on the way we envisioned the COFE should take place. According to the EU annual local and regional Eurobarometer: a majority of Europeans in all Member States (58%) think that more influence for regional and local authorities would have a positive impact on the EU’s ability to solve problems. That is why, with the Committee of the Regions and other local and regional associations, the AER has advocated for giving a bigger role to regional representatives at the Conference. As a result, the AER President, Magnus Berntsson, had a seat in the Plenary Sessions of the Conference, and made several contributions within the Working Group on Migration.

In Spring 2022, the Conference reached its conclusions and provided guidelines for Europe’s future. The AER upon the decision of our Vice President on Democracy, Nina Björby, decided to establish a Drafting Group to follow on the work and main outcomes of the COFE and draft a series of recommendations for the future of European regions summarising the main messages from adopted AER position papers. These recommendations have been set around the main policy topics that the Conference has been focusing on, such as:

AER’s integration in the Conference on the Future of Europe

Despite the disruption caused by the pandemic, the AER has been on the Conference agenda several times since it began, with the overall aim of advocating for a citizen-centred European Union. The journey began on October 2019 when AER joined the Civil Society Organisations Network led by the Union of European Federalists (JEF) as a non-state actor. Together with twelve other Civil Society and NGOs, AER signed a letter of recommendations for the Conference, which was forwarded to the European institutions. In June 2020, and following some meetings and discussions within the network, and in line with the proposal presented by the European Parliament and the European Commission, AER signed a statement wishing the success of this Conference.

At the same time, the AER Secretariat has been monitoring and following the updates on the state of the play of the Conference on the Future of Europe. The AER President has been holding meetings with key representatives from the European institutions that have been leading this process, such as the cabinet of Commissioner Suica, the Croatian Presidency to the Council, and members of the European Parliament. On these occasions, AER has always expressed its support towards a successful Conference and the importance of ensuring the representation and involvement of citizens from all European regions. Having a seat in the plenary sessions of the COFE, together with local association and regional representatives of the Committee of the Regions was a real success for our work on regional and local governance, and allowed us to make recommendations on what we think is important for Europe in the coming years.

In Spring 2022, the Conference reached its conclusions and provided guidelines for Europe’s future. Now that the Conference is coming to its end, we can draw the following conclusions. As we bounce back from the pandemic, and in the face of new global challenges, European cooperation at all levels is needed more than ever. There is strong interest in further debate about the future of Europe in the population, for example during election time, but also through initiatives like citizens’ dialogues, etc. These are tools to really put ourselves ‘in the shoes’ of Europeans citizens, and give them a real say in shaping Europe’s political agenda.

Therefore the Assembly of European Regions recommends to:

Democracy is a key factor for the promotion of peace and human right. The promotion of good governance is one of AER Political Priorities for 2020-2025. In this regard, AER calls European stakeholders to promote a strong local and regional democracy across Europe. First we are convinced that this requires the participation of all citizens at all levels of governance. Indeed to foster democracy all around Europe, citizens must be educated to counter disinformation, they must be involved regardless of their gender, racial or ethnic background. Local and regional authorities must be involved in the EU structure through the sound application of the principles of subsidiarity, partnership and multi-level governance which are fundamental pillars of European Union.

According to the World Wide Fund for Nature (WFF), we are currently using 74% more than the planet’s ecosystems can regenerate, or the equivalent of the resources that 1.7 planets can produce. Based on this diagnosis, we can say that our mode of production and consumption is not viable for future generations. The theme of sustainable development could not be avoided at the Conference. Although all European countries are concerned by this issue, they do not all approach it in the same way. Decisions are often taken on the basis of national or international interests, but too little on the basis of regional concerns. However, local and regional governments are crucial in accelerating climate action and delivering agreed climate target. The overall goal can only be achieved through their meaningful involvement in the design, implementation and monitoring of climate strategies. EU institution should involve more regional and local governments in the development of territorial just transition plans, in order to build a net-zero economy that is fair for all. To allow this they should provide better funding to local and regional governments under the recovery instruments.

Food and nutrition security is a focus in AER’s vision for sustainable and inclusive regional development. In this regard, in March 2021 we held a webinar on Innovation and farming that focused on advanced manufacturing solutions in driving sustainable change in the agrifood sector. We believe that regions have an important role in fulfilling EU food challenges since these affect regional development from a variety of angles. Regional authorities have the power to act at different levels in the food system, be it at the level of production, transformation, logistics and transport or distribution and waste management.

Cities and regions are the major enablers of digital transformation in Europe, they orchestrate the development of vibrant innovation ecosystems by bringing together local resources and mobilising the participation of stakeholders. As the world becomes increasingly connected, digitalisation is a key differentiator that will allow regions to remain competitive, providing a vital opportunity to prevent depopulation and foster sustainable development and economic growth. Being the world’s second-largest economy, the EU should aim to master the digital challenges while improving regional competitiveness.

Build an inclusive and intercultural Europe

Europe is continent with great diversity and a troubled history. There is no shade of a doubt to the fact that diversity is likely to increase in the years to come, adding to these challenges. The current international situation shows us that peace is never guaranteed, but that it is built through common projects and dialogue.

We believe that our regions are front liners to embrace this diversity, unlock its potential and acknowledge it as a resource for everyone. This is a value AER places at the core of our day-to-day work. For example, our project EU-Belong, aims to improve the socio-economic inclusion and the sense of belonging for migrants through their integration in European regions. With regard to the COFE, to allow us to put forward our main message on diversity, inclusion and equality, President Berntsson set out our priorities in the Plenary Sessions of the Conference in the Working Group on Migration. What came out of these discussions is that migration should take a comprehensive approach. It should always cover respect for human rights, solidarity and equality. The situation in Ukraine was also referenced to show how crucial local and regional authorities are when it comes to protecting and supporting vulnerable refugees. This is why we call on the EU to give regions a real say in migration and integration policies to secure the inclusive Europe and his citizens.

Our final recommendation would be the continuity of the Conference and the establishment of a permanent European consultation structure. Across all the challenges raised about migration, digital transition, climate change, democracy or health, local and regional stakeholders have the power to make an impact. This is why, within the AER, we consider that this Conference should be the precursor of a permanent mechanism of citizen engagement and consultation in the EU. Regional and local authorities must be meaningfully involved in the EU structures of decision-making, especially in view of the post-COVID-19 recovery. In this regard, the Conference on the Future of Europe has been a unique opportunity for regions to advocate for institutional reforms: for enhancing the EU architecture
in a way that it truly delivers on the principles of subsidiarity, partnership and multi-level governance; and for an EU architecture that gives a stronger voice to regional authorities and its citizens by properly engaging them in the EU decision-making process.

Tap the button below to read the AER recommendations for the future of European regions: