You are here: Home / Hands-on business practices in Østfold: the YRN Business Game

YRN organised a very interactive workshop at the Summer Academy. The Youth Entrepreneurship Business Game was the result of the discussions of YRN Committee on Professional Life and Youth Entrepreneurship last year at the summer academy in Portugal, and at the spring plenary meeting this year in Lillehammer.

The introduction to the workshop was done by Ms. Stine M. Bjørnstad from Fru Blom Design. She shared her experience of starting her own business, responding with creativity to a concrete need. The coffee shop where she was working needed heavy tables for outdoor conditions that would not be easy to steal. Since they couldn’t find them anywhere, Ms. Bjørnstad decided to create them using local resources, and when clients started to ask where they could buy those tables, the idea of Fru Blom Design took form. You can find the presentation here.

This successful story was very inspiring and motivating, proving that you don’t need much to start with your own company. A good idea and the will to make it happen are the best resources to start. This premise set up the floor for the second part of the workshop: the interactive game.

Based on the Dragons’ Den game concept, the workshop challenged three teams to present a business idea to a panel of judges composed by Ms. Stine M. Bjørnstad; Ms. Siv Henriette Jacobsen (Vice County Mayor of Østfold); and Ms. Anne Wold (head of business section at Østfold County Council). The final product had to be socially responsible. Teams could opt for designing an eco-friendly product, or developing a business idea that contributed to solve the challenges of the refugee crisis (or both). 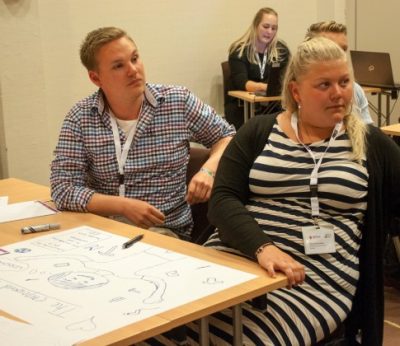 In the first part of the game, participant teams were given half an hour to make a poster about the main concept, through text or images. The second part of the game included a surprise. The participating teams were asked to swap the posters. The idea they will be pitching to the board of judges would be one of the ideas that was drafted by another team. Teams were allowed to make changes in the project, adding their own ideas and making it better.

What was the aim of the game? First, we wanted to make the participants use their imagination to come up with a totally new product that was at the same time a good business idea and a project that strongly addresses an existing problem in real life. The second goal of the game was to help people to step out from their comfort zone, by pitching an idea that is not their own project. It was interesting to see how the groups reacted to the pitch about their original ideas that were made by the second groups.

The participants came up with great business ideas & got valuable feedback and were encouraged by the board of judges to make them happen in real life. (If they don’t do it then someone else will do). In addition, all the business ideas were strongly associated with the refugee crisis, even though it was an option. This denotes a strong sensitivity to the issue, even when the refugee crisis is not on the focus of the media anymore.