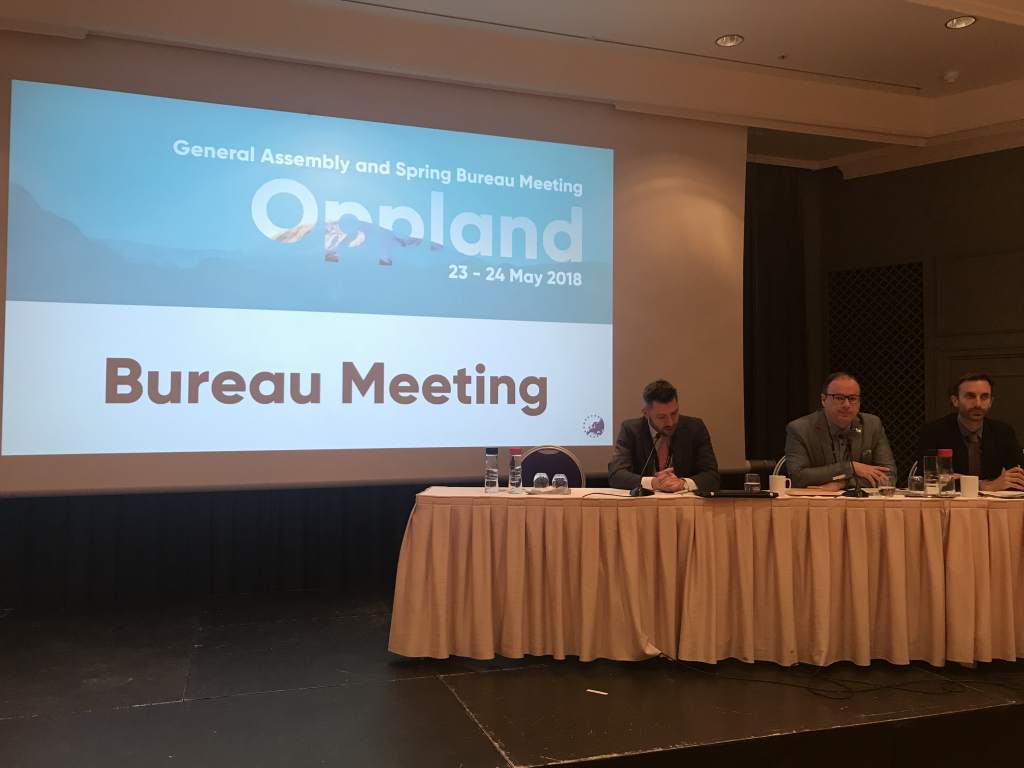 Following the past AER General Assembly which took place in Lillehammer (Oppland, NO) on 23 May, the Bureau members got together on Thursday 24 May to discuss key issues concerning the future of the cohesion policy budget and AER overall political direction and priorities for 2018-2019. The Bureau is the primary political voice of AER and establishes the political base for AER lobbying and advocacy actions by preparing strategical positions and decisions on European and global affairs affecting regions. 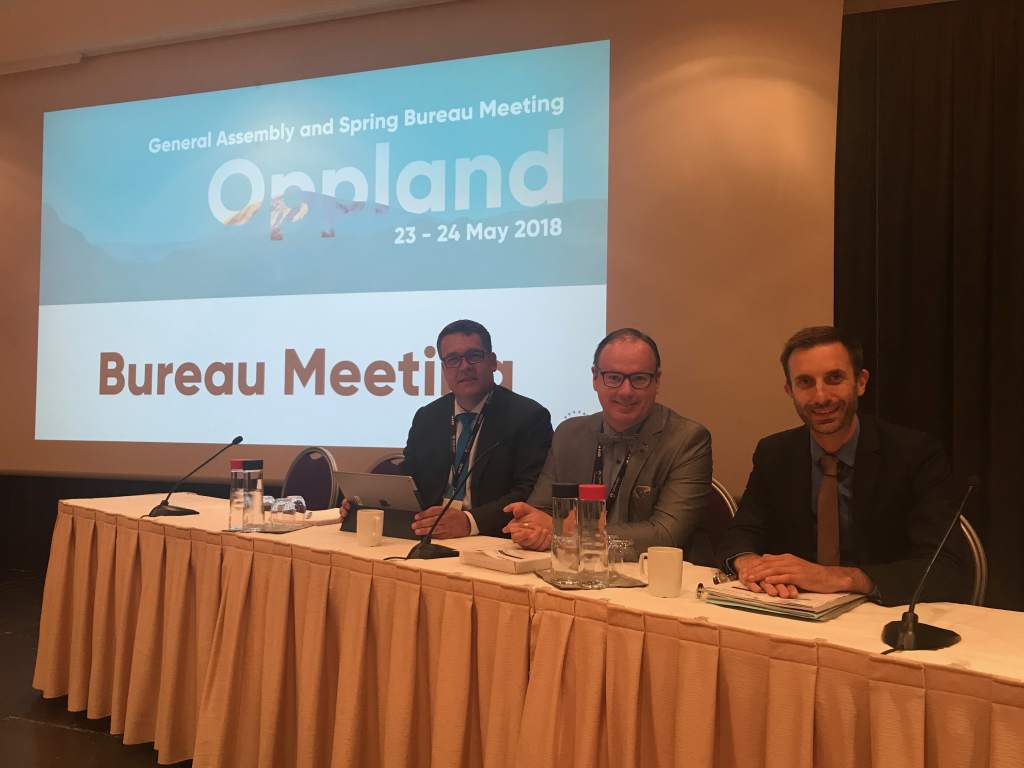 The Bureau Meeting was opened by Ms. Aud Hove, Deputy County Mayor of Oppland, who stressed the repercussions and challenges that climate change entails for policy-making urging to take advantage of the window of opportunities awaiting to build a green and sustainable future.

On 2 May 2018, the European Commission announced its proposal for the new EU budget which will be followed by detailed legislative proposals to frame cohesion policy after 2020. This new architecture for funding is crucial for the regions to fulfil their social, economic and territorial cohesion objectives. Overall, the Commission proposes a long-term budget of €1.135 billion in commitments (expressed in 2018 prices) over the period from 2021 to 2027, equivalent to 1.11% of the EU27’s gross national income. This level of commitment translates into €1.105 billion (or 1.08% of gross national income) in payments in 2018 prices.

Mr. Michiel Rijsberman, AER Rapporteur for the Cohesion Policy Task Force, made a short introduction on the Multi-annual Financial Framework (MFF) for the 2021-2027 period pointing out that important EU contributors (such as France, the Netherlands or Austria) have expressed reluctance to increase their share of the budget in concept of payment for the Brexit bill. Another remarkable aspect of the MMF is the fact that the European Social Fund (ESF) will turn into ESF +. Despite this fact, it is foreseen that the ESF may be expanded, and Bureau members demanded greater clarity regarding its future and impact on regions.

In this context, Mathieu Mori invited Bureau members to discuss and adopt the AER statement on the future cohesion policy budget to guide AER’s advocacy work in the negotiation process. In order to boost the debate, Bureau members were divided into six working groups to discuss the draft and possible amendments.

Following the discussions and the amendment process, the Bureau Statement on the Future of the Cohesion Budget was unanimously approved!

The discussion on the EU budget was followed by a brainstorming session to raise specific issues of concern for the Bureau political discussion in the year ahead. In order to do so, the Bureau members were asked to work in groups in order to put forward other possible topics besides the ones proposed by the AER Executive Board (EB) on the previous day –namely, digitalisation, EU Pillar for Social Rights, the Common Agricultural Policy (CAP) and migration–.

Andrew Gibson, AER Vice-President from Hampshire county (UK), referred, on the topic of migration, to the EU position document on migration and asylum which sets out a new plan for a sustainable policy to strengthen the cooperation among EU countries as well as providing a more flexible funding to address migration and the inclusion of immigrants and refugees in society. Andrew Gibson pointed out that AER must contribute to this European Agenda by sharing the knowledge and good practices of regions.

Mr. Jean Luc Vanraes, President of AER Committee 1 for Economy and Regional Development, addressed the Bureau members stating that the digital, new technology and public affairs policy stream is preparing the next generation of actors to leverage the nexus of interactions between exponential technologies, public affairs and civil society. The digital revolution is transforming the inner workings of our economies, businesses, democracies, social models and public affairs. The regions therefore need to take the lead and invest in this strategic sector where many jobs will be created.

Ms. Anna Magyar, AER Vice President for EU enlargement, took the floor to stress the importance of the Common Agriculture Policy (CAP) for the economic development of regions. The CAP is a vital policy enabling farmers to provide a stable food supply, produced in a sustainable way at affordable prices for the benefit of more than 500 million European consumers. Considering it is a key policy for integration and development, and in view of the next financial period pos-2020 which tends to decrease the budget for the CAP, Ms. Anna Magyar suggested to the Bureau members to do a strong lobby for keeping the budget.

Mr. Mihai Ritivoiu, President of AER Committee 2 for Social Policy and Public Health, proposed the Bureau members to contribute to the European Pillar of Social Rights, by formulating recommendations based on the good practices of regions in the areas of equal opportunities and access to the labour market, fair working condition and social protection and inclusion.

Finally, Ms. Irén Lejegren (Örebro), suggested to work on the topic of food safety, which has a profound effect on regional development, not only in terms of production but also in terms of environmental challenges. In her view, the EU current level of legislation needs further development in the field of food safety and lacks an approach on sustainable development in line with the 2030 Agenda.

Following this round of presentations, the Bureau members decided by means of a vote to pick food safety, digitalisation and migration as priority matters for the next year.

Social innovation is now on the Bureau Agenda!

In the context of the ongoing reflection on the future of Europe and evolving discussions on the new EU budget and priorities for the programming period after 2020, Magnus Berntsson stated that social innovation can bring new solutions that address social challenges and improve the effectiveness of public policies and services, promoting growth and well-being.

Vania Freitas, AER Institutional Relations & Advocacy Coordinator, introduced this topic –proposed by Mr. Albert Castellanos, AER Vice President – by sharing the definition of social innovation presented by the EU Commission in its Guide to Social Innovation, its key aspects and approaches. The idea is to shift the innovation process by focusing on the needs of the people and engaging them in the solutions developed to meet those needs, at the adequate territorial level of intervention.

After this presentation, Bureau members were broken up into groups to explore the potential contributions of social innovation to growth and jobs, social equity and more healthy communities, and discuss the processes that facilitates social innovation and harness its positive potential to support social sustainability at regional level.

The outcomes of this discussion will lead to a political position at the next Bureau meeting in Autumn!