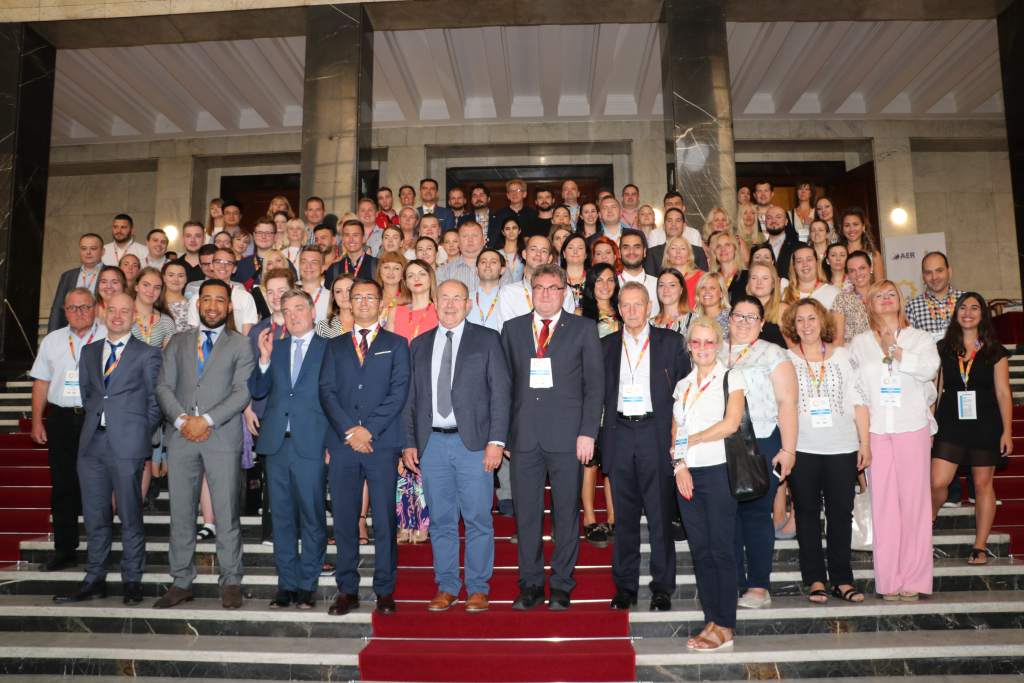 Now that the 2019 Summer Academy is over, it is very fair to say that this year’s edition was a complete success with a total of 100 participants from 32 different regions and 19 countries from all over Europe and beyond!

The 2019 AER Summer Academy with the motto Youth is Future, Youth is Europe! was hosted by the Autonomous Province of Vojvodina (RS) in the beautiful city of Novi Sad from the 1st to the 5th of July. Throughout the week, the youth delegates and regional officials participated in plenary sessions, seminars, workshops and other activities that allowed them to have their saying and exchange their perspectives regarding the #FutureofEurope.

Opening of the AER 2019 Summer Academy!

On the 1st of July, the opening session gathered high-rank politicians from the Autonomous Province of Vojvodina and from the European arena. Following the performance of a choir singing live the national Serbian anthem and the European anthem, the AER 2019 Summer Academy was officially inaugurated by Mr István Pásztor who welcomed the participants to Novi Sad, Vojvodina. The AER Vice President for Interregional Democracy, Damir Zobenica, wished the participants a fruitful and joyful week in Novi Sad, and so the President of the AER Summer Academy, Rune Fredriksen, did. Furthermore, AER and AP Vojvodina were also honoured with the presence of the Head of the Council of Europe Office in Belgrade, Tobias Flessenkemper, the recently elected Vice President of the AER Youth Regional Network, Paula Holst, as well as the AER Vice President for Equal Opportunities, Andrew Gibson.

After the official kick-off of the 2019 Summer Academy, the 1st Plenary Session started under the topic “Youth is democratic participation and European Citizenship”. In this session, moderated by Hrvoje Kovac, Chair of AER sub-committee on youth, Jovana Majstorović (European Youth Forum) stressed the importance of having young people involved in politics and being politically educated in schools.

“Youth is Diversity and Equal Opportunities for all”

The Plenary Session 2, moderated by Tamara Glišić-Krivošija (AP Vojvodina), brought up various relevant topics that have direct impacts on young Europeans: the right to have equal opportunities no matter their background, gender, or physical conditions.

Angela Unufe-Kennedy, Migrants and Minority Disability Network Europe, raised awareness about the enormous obstacles that the young migrant population has to face to thrive in the society they are part of. Bojana Gladovic, National Organization of Persons with Disabilities of Serbia (NOOIS), called on public administrations, private sector, NGOs and civil society to their joint responsibility in harnessing the abilities of young people with special needs and to create more job opportunities for this specific sector of the population.

The 3rd Plenary Session under the topic “Youth is Social Entrepreneurship and Sharing Economy” gathered four experts in this specific area. Sarah de Heusch, Smart Coop, explained that the sharing economy is an evolving concept as the young people have unlimited capacity and creativity to boost new forms of economy. Vladimir Nikic (Business Incubator) pointed out that young people may be afraid of taking risks and there is always a resistance to innovate and change the pre-established state of things. Luca Spissu, Sardinia-ASPAL (IT), described innovation as a creative idea that leads to a revolution in thinking at the benefit of the whole society. Aleksandre Davitadze, Deputy Minister of Education in Ajara (GE), expressed concerns regarding the lack of stable regulation frameworks for entrepreneurs so a more secure system should be put in place to incentivise innovation.

“Youth is a driving force for green development”

The last Plenary Session of the 2019 Summer Academy tackled the topic of how youth can contribute to building and advocating for climate resilience at the regional and local levels. The President of AER, Magnus Berntsson, the AER Vice President for Democracy, Nina Björby, and Aleksandra Illijn, OPENS 2019 Foundation, exchanged views and agreed upon the fact that the regional authorities and young Europeans can be more responsive and deliver with more efficiency on the challenges of preserving the environment and preventing climate change. Furthermore, the Summer Academy youth participants took the floor and interacted with the speakers making questions about the role of youth in taking up these challenges.

The 2019 edition of the Summer Academy concluded with the speeches from the AER President, Magnus Berntsson, and the AER Vice President for Democracy, Nina Björby, who expressed their gratitude to the host region, AP Vojvodina, and handed out the certificates of participation to all the Summer Academy delegates.

AER would like to express its warmest gratitude to all the participants, the speakers, the volunteers but, especially, to AP Vojvodina and OPENS Foundation for hosting the event and making this 2019 AER Summer Academy a great success!

Visit the event page of the AER 2019 Summer Academy to get all the presentations, pictures, videos and more takeaways!