You are here: Home / News / Connectivity: AER at Smart Airports in Germany

AER was invited to contribute to Smart Airports in Munich, a series of conferences about the role, evolution and future of airports. Martin Tollén, Chair of the AER working group on Transports & Mobility shared insights on growth, social responsibility and sustainability during the first day conference “Aviation & Economic Development”. His presentation on regional connectivity and competitiveness provided a much needed regional perspective on this topic since all other presentations and speakers were focused on national airports and their contribution to national economic growth. 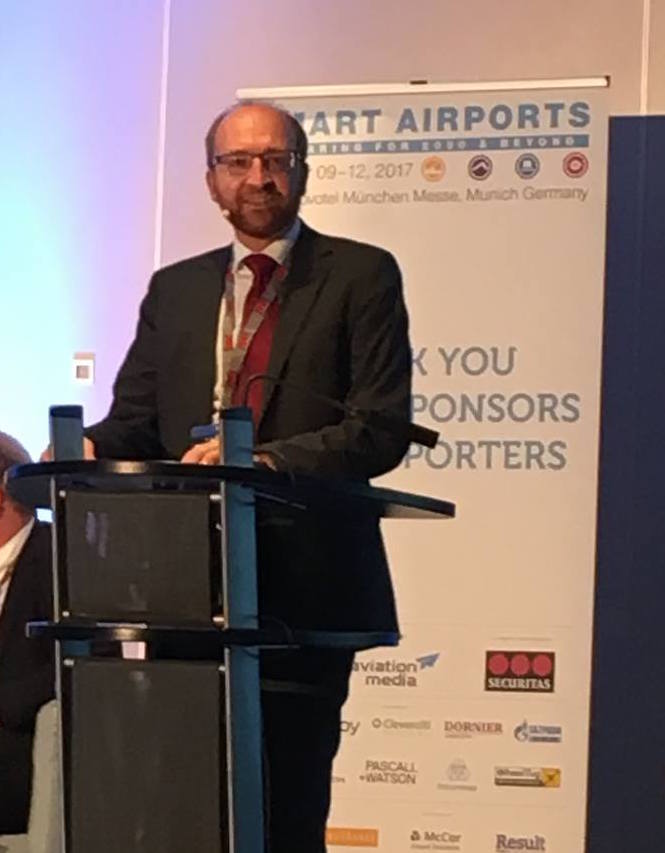 One of AER’s missions is to be the voice of the regions in Europe. In that role, AER has worked with the issue of state aid and financing of regional airports for many years, often in cooperation with ACI – Airports Council International. The reason for this involvement lays in the fact that many AER members have smaller airports which might need support in order to maintain operations.
Because politicians are real people too, they also have “real” jobs. Martin Tollén is a politician in Region Östergötland (SE), and when he is not working with politics he is a risk manager at the defence and security company Saab. While Saab has a lot to offer also in the airport industry, Martin Tollén spoke in Munich exclusively as a representative for AER, not for Saab.

The European Commission launched a comprehensive strategy for the European aviation sector in December 2015, stating that Aviation is a strong driver of economic growth, jobs, trade and mobility for the European Union. Airport infrastructure availability is a major determinant in the location choices of large firms’ headquarters in Europe. Connectivity, however, cannot be taken for granted. Airport connectivity in Europe varies significantly between major hubs on the one hand offering hundreds of destinations and small regional airports on the other with only a few. The Chair of the AER working group on Transports & Mobility underlined the crucial role of regional airports for regional development and shared the experience of his own region:

My region, Östergötland is a good example of the importance of smaller airports for regional competitiveness. From our two airports we have three daily flights to Amsterdam and two to Munich. That was enough for Toyota Material Handling to locate its European head office close to its plant in Östergötland.

Around Linköping University, small but fast growing high tech companies have emerged. They have a wealth of possibilities but few resources. With few employees they cannot afford to spend most part of a day in a car or on a train travelling to and from one of the larger Scandinavian airports. If it weren’t for the regional airport, many of these companies would have to leave the region.
Regional airports make it also easier to visit large companies such as Siemens, Saab, Sectra, Ericsson and of course, Linköping University.

The future competitiveness of the European air transport sector and its environmental sustainability go hand-in-hand.

In line with the Energy Union agenda, an important contribution to the reduction of aviation’s environmental impacts will come from current research and development actions for innovative “green” technologies, including the development and market deployment of advanced biofuels. EU programmes support the modernisation of air traffic management and the reduction of the impact on the environment. Clean Sky, the largest European research programme for the development of cutting-edge technology aimed at reducing CO2, gas emissions and noise levels produced by aircraft is funded by the EU Horizon 2020 programme. In this context regional stakeholders in Östergötland have agreed on a Memorandum of Understanding. Moreover, the association for Sweden’s regional airports has committed to achieve of fossil free domestic flights in 2030. The transformation to fossil free fuel and a climate neutral flights requires multistakeholder engagement.

Urbanisation puts a pressure on the infrastructure in Europe’s larger cities where most of the major hubs are located. Regional airports present a possibility to reduce that pressure around the major hubs by spreading passengers on more nodes. Consequently, the resources which would have been needed to solve infrastructure problems in larger cities, can instead be used for other purposes. This makes it possible to create growth in a larger area and support the creation of a more robust society.

Preparing for the unforseen

As a risk manager Martin Tollén always looks at what lays ahead. Hi job is to inspire managers to prepare for the unforeseen. What about regional aviation and connectivity? The below two real-life experiences illustrate the idea that disruption often comes from places it is not expected.

Banking: who is going to be the next challenger?

A chief executive of one of the major Swedish banks was recently stating how little he worried about the competition from other banks:

He wasn’t worried about competitors trying to cherry-pick parts of what banks are offering either. So, what kept this banking executive awake at night? It was completely new competitors transforming the industry itself. Goggle, Über, Apple have recently been mentioned as future partners for the airport industry. If they become the new competitors, how will the market look like? What products will be offered to clients?

In New England in the 1880th, Ice barons harvested ice from lakes during the winter and shipped it all over the world.

Nothing can threaten our success, the world will always need ice

They might have been aware that the refrigerator was invented a few years earlier, but they didn’t realise the impact on their own business.

The Chair of the AER Working Group on Transports & Mobility therefore encouraged the audience to reflect about challengers in a broader way and asked attendees: what are your refrigerators?

Photo by Deborah Kunzie on Unsplash