You are here: Home / Archives for Structure / Committees / Committee 1

The articles below relate to the work of Committee 1 on Economy and Regional Development. 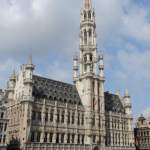 Brussels, 12 May 1999 The first meeting of the AER political Bureau, in its new composition issued from elections at the General Assembly in Linz (A) in last December, will be held on 12th May in Brussels. Several subjects will be discussed and in particular: • Regions faced with the situation in Kosovo; • Project of the European Constitution, the … END_OF_DOCUMENT_TOKEN_TO_BE_REPLACED