You are here: Home / Projects / Generalitat de Catalunya’s Webinar on the necessity to feminise the management of public resources 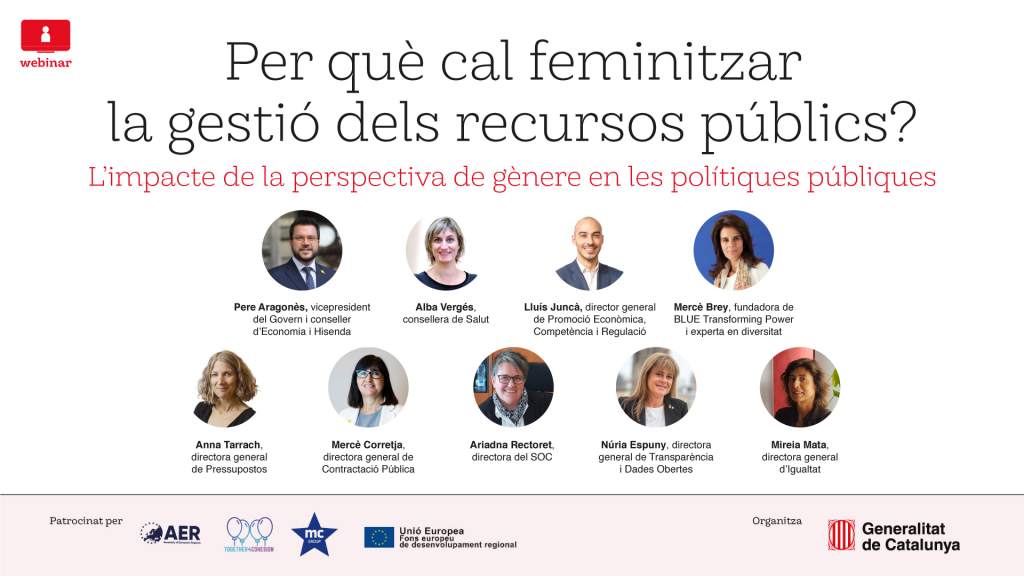 On 22 June, the Generalitat de Catalunya is holding a webinar to discuss the necessity to feminise the management of public resources. The event is held in the context of the European Cohesion Calendar of the project Together for Cohesion and will target public authorities representatives.

The webinar will be held in Catalan.

It will start with a presentation from Lluís Juncà, General Director of Economic Promotion, Competition and Regulation, followed by an instructional welcome from Pere Aragonès, Vice President of the Government and Minister of Economy and Finance. Mercè Brey, consultant and speaker specializing in diversity and inclusive leadership, will present her paper titled: ‘Més enllà del gènere, una realitat possible’ (Beyond gender, a possible reality). A round table to debate and reflect on the impact of the gender perspective on the management of public resources will follow. Various panelists will take part in the discussion:

The event will end up with a conclusion from Alba Vergés from the Minister of Health.

What’s next?
In the coming weeks, more activities will be organised by the regions involved in Together for Cohesion. We invite you to check out our Cohesion Calendar to be updated on upcoming events! You can also have a look at the success stories gathered from projects funded by the Cohesion policy around Europe.