You are here: Home / Projects / Call for Third Parties: Join Together for Cohesion 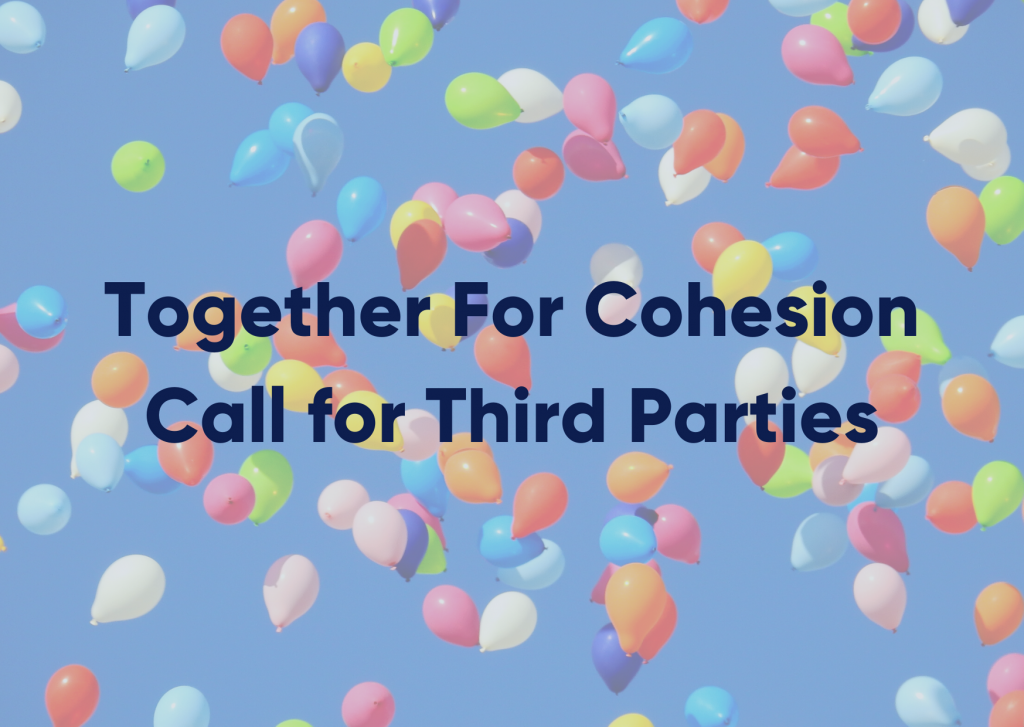 The consortium of the project “Together for Cohesion: Let’s rEUnite!” is seeking third parties willing to embark on a very stimulating communication campaign focused on projects and activities implemented in the framework of EU cohesion policy. Through this call for third parties, we want to identify local or regional authorities, private companies, NGOs, and other stakeholders that have a success story of a project or initiative (co-)financed by the European cohesion funds, and that are eager to share it within “Together for Cohesion: Let’s rEUnite!” communication campaign.

“Together for Cohesion: Let’s rEUnite!” is a communication project co-funded by the European Commission-Directorate General for Regional and Urban Policy. The project started on 1st April  2019 and will run for 16 months. It is coordinated by the Assembly of European Regions (AER) as leading partner in cooperation with the ‘media consulta International Holding AG’ (mc Group).

Together for Cohesion’s aim is two-fold: on one hand, we want to raise awareness about the importance and the real-life benefits of programmes, projects, and services founded through the cohesion policy funds. Complementarily, our campaign is based on a bottom-up approach that seeks to empower the main beneficiaries of the policy and to make their voice louder. Hence, we aim at encouraging citizens and stakeholders’ active involvement in cohesion policy to turn them in active players in the regional and national dialogue on cohesion policy.

For one year now, we have been a major hub for the collection and dissemination of success stories of cohesion funded projects and activities at both local and international levels. We have collected best practices in the communication on the use of cohesion policy funds by eight regions, organized and participated in international conferences and knowledge-sharing workshops.

Throughout this time, we have been working in strong cooperation with Together for Cohesion’s flagship regions: Alba (RO), Catalonia (ES), Csongrad (HU), Timis (RO), Trentino (IT), and Varazdin (HR). Public authorities of the six flagship regions have been communicating cohesion policy through a series of local events in each region. We have provided public authorities and stakeholders in the regions with exceptional learning opportunities about how to effectively structure their communication activity through interactive workshops trainings. Citizens and targeted stakeholders that have benefitted from cohesion funds have been actively engaged in our campaign as Ambassadors/Messengers of cohesion by telling their stories, bringing their testimonies, participating at the events, and disseminating our achievements. Visit AER and Together for Cohesion websites for detailed information about all the initiatives implemented until now.

In the coming months until the end of the project, we will continue implementing the above-mentioned activities, as well as launch new meaningful actions. We are producing videos about the activities of Together for Cohesion and short documentaries on success projects; establishing partnerships with local and national media outlets that will give to cohesion policy and its projects widespread visibility; organizing the project’s final event (webinar); and give visibility to the efforts of third parties.

Together for Cohesion is opening the floor to the stories of third parties too. We know that success stories of projects and initiatives funded by European cohesion policy are many and involve all the regions in Europe. Hence, we are calling for local or regional authorities, private companies, NGOs, and other stakeholders that have benefited from EU cohesion funds to become active members of our communication campaign.

To this extent, we would like you to contribute in this way:

By joining Together for Cohesion campaign, you will have the opportunity to:

How to express your interest