You are here: Home / News / Building new ties with the French regions

On 10 and 11 October, a delegation from the Assembly of European Regions (AER) traveled to France to meet with four regions which are currently not members of AER: Bretagne, Pays de la Loire, Normandy and Ile-de-France. This field visit took place in the framework of this year’s territorial reform in France, that reduced – by merging – the number of metropolitan regions from 22 to 13, while giving them more competences, notably in the field of economy, employment and transport, three key topics for AER. As a result of this reform, coupled with the regional elections of 2015 and many new majorities arising, the AER Executive Board decided to put a strong focus on France this year, and build new ties with the regions. The AER delegation was led by the AER Vice-President for Institutional Affairs and Leader of Hampshire County Council (UK) M. Roy Perry, accompanied by member of the AER Executive Board and regional councillor from Grand Est (FR) M. Christian Debève, and the AER coordinator for membership and institutional relations M. Alexandre Brecx.

AER is very proud to count seven French regions among its active members (Auvergne-Rhône-Alpes, Bourgogne-Franche-Comté, Corse, Grand Est, Guadeloupe, Guyane, Martinique) and ambitions to strengthen this presence in the months to come.

AER Vice-President Roy Perry had a lively working lunch in Rennes with M. Jacques Le Vagueresse, Director of European and International affairs of Bretagne. They extensively discussed about the consequences of the Brexit for the European regions. Bretagne is indeed very much connected to the United Kingdom, be it in terms of economy, tourism, maritime issues – but also in terms of history and culture. They both expressed clear wishes and commitments to maintain strong binds over the English Channel and to keep interregional cooperation alive. The rise of extremisms and populisms in Europe was also at the heart of the meeting, and Mr. Le Vagueresse stressed the responsibility of the regions to communicate more and better about Europe to the citizens. Among other things, they identified various areas of common interest for regional development, exchange of practices and connections with the European institutions to voice the interests of regions.

The second visit of the trip of AER Vice-President Roy Perry led him to Nantes in the Région Pays de la Loire, where he was welcomed by M. François Pinte, 1st Vice-President, Mrs. Vanessa Charbonneau, Vice-President for European affairs, and M. Stéphane Labonne, Director of European policies. After presenting the work and activities of the Assembly of European Regions, Mr. Perry shared experiences as a former Member of the European Parliament. He also gave some very concrete examples of interregional cooperation which were built thanks to AER, and underlined how his County benefited from the AER membership. The representatives of Pays de la Loire showed their interest in cooperation with the European regions and in enhancing their presence on the European stage. They also shared the new European strategy of the region “A more useful Europe for a more efficient Region“ with the AER delegation, which will serve as a basis for further discussions. 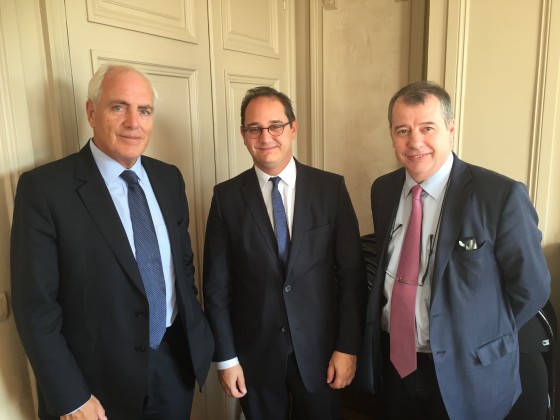 For the third meeting of the trip, M. Roy Perry was joined by M. Christian Debeve. They paid a visit to M. François-Xavier Priollaud, Vice-President in charge of European and international affairs for Région Normandie, in the Parisian office of the Régions de France. Normandy is a “new region“ from the reform, made up of Lower and Upper Normandy. The delegation exchanged on the new structure and new competences hold by the regional council, and more generally about the state of decentralisation in Europe, a very important topic for AER. M. Priollaud then introduced the region’s European and international strategy to the AER delegation. He stressed in particular the importance of keeping strong links with the South of England, a message well heard and shared by M. Perry, Leader of Hampshire County Council. Building on the history of the region and its ties with Europe, they extensively discussed about the contribution of Normandy to the process of peace and democracy, a topic at the very heart of the AER priorities. 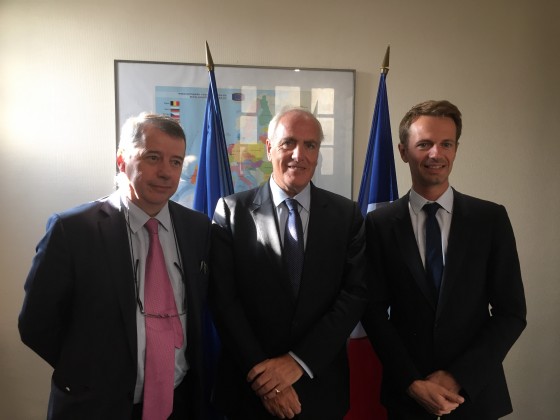 For its final meeting with the French regions, the AER delegation met with M. James Chéron, President of the committee for European affairs in the regional assembly of Ile-de-France. M. Chéron addressed the issue of the UK referendum with M. Perry, expressing their fears about the coming months and years, and the long negotiation process ahead. After an informative discussion about the structures and missions of AER, they got back the very long history of Ile-de-France within the network, and the key role it has played over the last decade. M. Chéron gave some insights on how the regional council is now working, its main driving forces and how it envisages its presence in the European arena. This very useful meeting was an important opportunity to re-create links with the region, and launch ideas for future cooperations. As stated by M. Chéron: “exchange, share, build, mutualise, succeed!“