You are here: Home / News / Basque Country Initiative on Integration of Migrants and Refugees 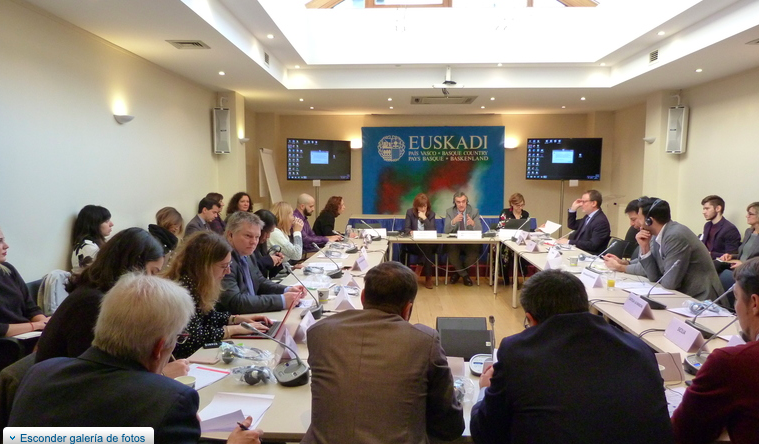 On 4 December 2019, the Assembly of European Regions participated actively in a seminar organized by the Basque country (ES) on the reception and integration of migrants and refugees, in Brussels. Indeed, AER work closely with our member regions by sharing knowledge and good practices on the topic.

The purpose of the Basque country seminar was to present an initiative called “SHARE” about the principles of solidarity and co-responsibility in the reception, distribution and integration of migrants and refugees across the European regions. An update on the proposal for a new European Pact on Migration and Asylum (DG HOME, European Commission) was also provided.

What is the Basque Country proposal about?

SHARE proposal is led by the Basque Government with the support of several European regions. The objective of SHARE is to promote solidarity and co-responsibility in the reception of refugees and migrants, for which it proposes to agree, at European level and on a transversal basis, a key of territorial distribution of the effort of reception and inclusion of migrants in most vulnerable situation.

For this territorial distribution, a formula based on three parameters is proposed: tax revenues (or Average Available Income, or GDP per capita), with a weight of 50%; the population, with an incidence of 30%; and the unemployment rate, with 20%. The application of SHARE in States, regions and municipalities would be directed to refugees and asylum seekers, migrants in an unregulated situation and special vulnerability, and minors and young people who migrate alone.

Logically, this is an open proposal. The objective is to have the greatest possible consensus. At the moment, following the meetings that took place on 2 April and 4 December in Brussels, the “SHARE project” is supported by the regions of Canary Islands, Navarre, Catalonia, Melilla, Communauté d’Agglomération Pays Basque, Attica, Nouvelle Aquitaine and Basque Country. The Basque country is now inviting more European regions to join this initiative.

Why the Basque initiative is relevant for the AER advocacy work?

On the European level, AER has a dedicated taskforce on Migration within our Bureau which adopted a position paper on intercultural regions at our General Assembly in Larnaca in June 2019 – basically, calling for European institutions and national governments to adopt a proactive agenda on migration and to build a comprehensive approach that goes beyond the security-driven measures. Equally, AER considers that inclusion and humanitarian support actions as well as the provision of more accessible and sustainable funding and resources are key priorities for our regions to better integrate migrants and refugees, using a multilevel governance and multi-stakeholder approach, as well.

On the project management side, AER has also been an active partner in the DG HOME funded project called AMID – Access to Services for Migrants with Disabilities that among various activities, has resulted in the creation of a specific Online Needs Assessment Tool to allow regional and local authorities to better take into account the disability dimension while assessing the profile of asylum-seekers with the final goal to create a common standard approach to this specific vulnerable group of asylum-seekers at European level. Importantly also is that as of January 2020, AER will be co-leading – in collaboration with the International Organisation for Migration – a new DG HOME funded project called INCLUD-EU that will aim to improve regional and local actors expertise in putting in place integration measures and to promote the implementation of social cohesion actions at territorial level with a focus on the reception-conditions of migrants and refugees.