You are here: Home / Archives for Justin Sammon 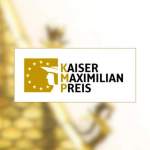 Are you undertaking a project or initiative in your region that puts European cohesion into practice? The AER invites you to apply for the 2021 Emperor Maximilian Prize! Instituted in 1997 by the Land of Tirol and the town of Innsbruck, the prestigious 'Emperor Maximilian Prize for European Service at the Regional and Local Level' is awarded biennially to pioneering … END_OF_DOCUMENT_TOKEN_TO_BE_REPLACED 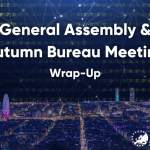 The first ever virtual General Assembly, Bureau Meeting and Eurodyssey Forum took place last week on 19-20 November. Owing to the Covid-19 crisis, these meetings scheduled to take place in Barcelona were moved online. Despite these challenges, AER members from across the continent tuned-in; making the most of the new format and ensuring the important work of the AER could … END_OF_DOCUMENT_TOKEN_TO_BE_REPLACED 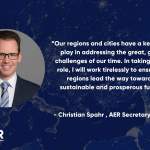 The Executive Board has appointed Christian Spahr as the Secretary General of the Assembly of European Regions (AER), which represents regional governments in wider Europe. A former European Commission Spokesperson for Regional Policy, Spahr will lead the work of the AER Secretariat, which has offices in Brussels and Strasbourg and also includes the AER’s Southeast Europe Hub … END_OF_DOCUMENT_TOKEN_TO_BE_REPLACED 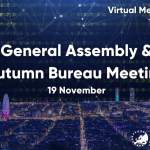 After carefully considering the developments of the pandemic in Europe and the current regulations and guidance regarding international travel and large events, we have decided to hold the General Assembly, Bureau Meeting & Eurodyssey Forum on 19-20 November online.  While we regret that we will not be able to gather our members in person in Barcelona, we feel … END_OF_DOCUMENT_TOKEN_TO_BE_REPLACED