You are here: Home / News / AER President stresses the importance of regional authorities during Strategov Forum 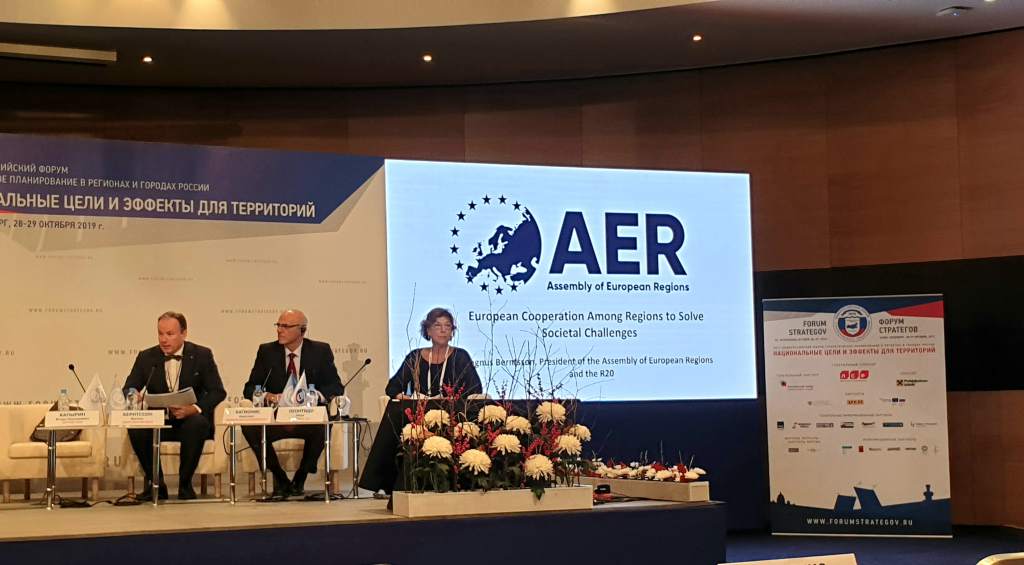 The President of the Assembly of European Regions, Mr Magnus Berntsson, recently participated in the 18th Strategic Planning Leaders Forum of Regions & Cities of Russia (Strategov Forum) that took place in St Petersburg from 28-29 October. The forum focused on topics such as international & interregional cooperation, digital economy, green technology and sustainable development. Mr Berntsson took part in the welcome and two roundtables, one dedicated to International Cooperation for Regional Development and the second on International and Cross Border Intermunicipal Cooperation.

During the Strategov Forum, Mr Berntsson stressed the importance of regions and cities as being instrumental in bringing about the 2030 Agenda and its sustainable development goals. This involvement of the subnational level is of utmost importance if we are to bring about this societal change. Next year marks the decade of delivery, and while steps have been made to tackle poverty, inequality and climate change, it is not where it should be. In order to achieve these goals by 2030, there needs to be localization, regionalization and implementation of the 2030 agenda at local, regional, continental and global level – at all levels and involve all stakeholders. These societal challenges are something that unites actors all over the world. The topic of climate change was of big interest to the Russians actors present as Russia ratified the Paris Agreement earlier this year. This has initiated a process where new laws will be implemented in line with the agreement.

The European Committee of Regions noted that 65% of the 169 targets included in the SDGs require the engagement of regions & cities to be achieved. 2020 will, therefore, be a crucial opportunity to reflect on how we are doing in Europe and beyond.  We have just one decade to shift the world into a sustainable and resilient path. The only way to successfully navigate this journey is to work together, ensuring the full and effective participation of local and regional authorities as well as other stakeholders in the sustainable development and climate processes.

Furthermore, Mr Berntsson stressed the importance of youth participation in society. Providing and giving opportunities for citizens and especially young people the possibility to engage in society and actively participate in decision making can be used to not only spread the seeds of peace but to lay the foundation of their future. Indeed, Mr Berntsson met with Anton Vakulenko, a young activist, in the promotion of the SDGs.

During the forum, AER met with different actors from the regional and local level and discussed areas of collaboration including: