From 12 to 14 September, AER was in Nancy, France for their Autumn Committee Plenaries.

The programme focused on the following topics:
For presentations, please visit the event’s webpage. >>HERE<<

As the autumn committees’ plenaries have come to an end, we look back on three very interesting and intense days, gathering more than 130 people from approximately 50 regions.

The theme for the plenaries was “Is there a future for culture in the digital age? The rhetorical question was vividly discussed the first day by the moderators as well as by our member regions. Several regions shared their experiences and best practices, and many good examples on how to make culture more accessible and how to empower the citizens were given. The regions also got an update on the European Year for Cultural Heritage 2018 and projects to come.

The Culture debate was followed by an update on AER’s task force work on the Cohesion Policy paper, which is one of the main advocacy works done by AER this year. This discussion brought many members into the task force, which shows the importance of advocacy. In addition to the task force’s work, a recently launched call for proposal for a project regarding Cohesion Policy was presented. The call was launched by DG Regio and the objective of the call is clear: to produce and disseminate information and content linked to EU Cohesion policy.

These engaging topics were followed by the three Committees’ Plenaries.

Jean-Luc Vanraes, Committee 1 President, opened his Committee’s session describing the status of their activity plan. It was followed by a debate on Artificial Intelligence (AI), and if the regions are up to the challenge. The participants were divided into groups to discuss the following AI in the following areas, education, jobs and innovation, health and citizen’s engagement.

The outcome will serve as a base for the event on Artificial Intelligence the 30th of November in Brussels organised by AER’s member, Brussels Capital.

Mihai Ritivoiu, Committee 2 President, opened the Committee 2 session with a current state of the Committee 2 Action Plan. After that a debate was held around inclusion and what the regions are working on and what their focus is. Groups were formed to exchange ideas and good practices on senior citizens, young people, immigrants and minorities. The result of the discussions will lay ground for potential joint projects on inclusion, to share good practices from all over Europe and try to define a general approach to inclusion.

Dag Rønning, Committee 3 President, started by giving a view on the action plan, then Mr Rønning presented a proposal of a cultural cooperation between AER and The Norwegian Youth Festivals of Art, UKM.

The objective of UKM is to stimulate young people’s creativity and make their cultural activity visible. The UKM is designed to be flexible and informal; it aims at tickling the participants’ curiosity and broaden their cultural horizon. The UKM is rooted in the regions in Norway and it’s therefore natural to use the regional level as a basis for developing international cooperation. The Assembly of European Regions (AER) with its Youth Regional Network could to be an ideal structure to realise this.

Several regions expressed their interest in the presentation and discussions will follow on how to realise this project starting in 2018.

During the day, Shine Bright recognitions, were given to 6 regions for their excellent work, engagement in the network and work to promote interregional cooperation. The regions were as following; Upper Austria (AT), Izmir (TR), Örebro (SE), Abruzzo (IT), Covasna (RO) and Grand Est (FR).

The following day, regions got the opportunity to debate and discuss around several interesting topics, the role of regions in culture, E-health network and the role of data, transport and mobility, smart and integrated, Youth Mental Health and Sustainable Development. The regions shared best practices and exchanged information on the various subjects, and the day also served as an arena for our members to meet and discuss potential cooperations and joint projects. Many new ideas were born and several regions learnt that they were sharing the same challenges. The challenges and the opportunities that follows will help to create better interregional cooperation and a stronger Europe.

The AER working group on Transports and Mobility held a workshop on smart green and integrated transport systems on 14 ...
Read More

As the next Executive Board (EB) meeting is around the corner, here is a short recap of the main outcome ...
Read More 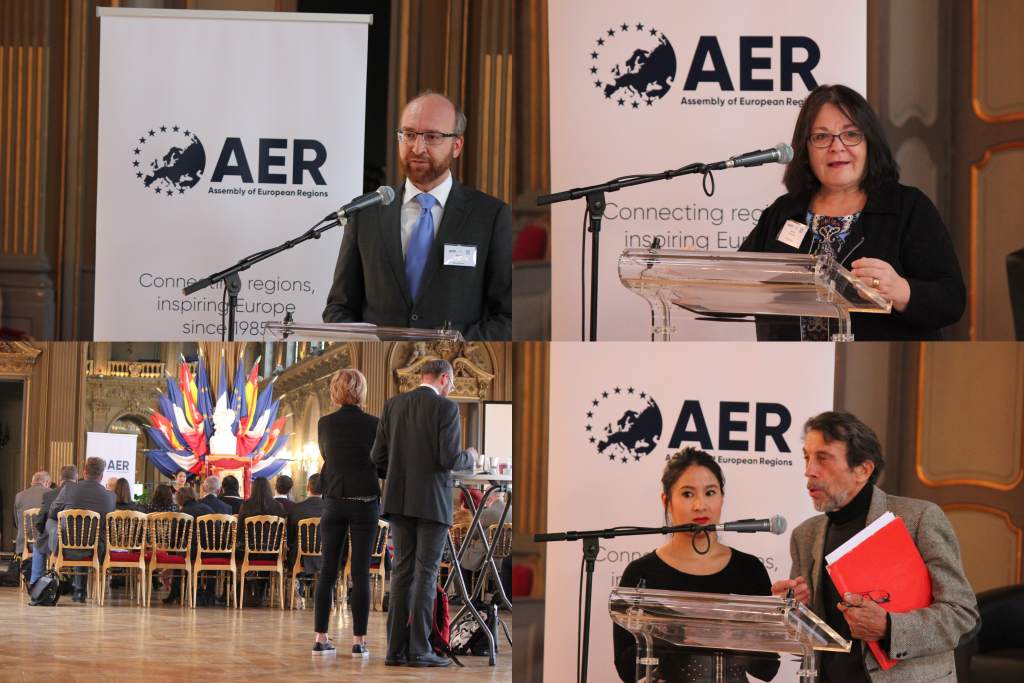 The AER Committee Plenaries –  Thank you for an eventful week!

The AER Autumn committee plenary week was very busy indeed. Hosted by the city of Nancy and the region of ...
Read More

#AERCP2017 From 12 to 14 September, AER was in Nancy, France for their Autumn Committee Plenaries. The programme focused on the following ...
Read More

On the occasion of AER 2017 Autumn Plenaries, Committee 1 will host a debate on Artificial Intelligence. Proposed by Jean-Luc ...
Read More

Call for proposal on Cohesion Policy: the perfect call for AER region members!

There are no topics that fit AER's mission more than cohesion policy. During its Bureau meeting in Lower Austria, AER ...
Read More

Friendlier Healthcare for all regions? We’re working on it!

Have you ever found yourself stuck for hours in your doctor's waiting room, waiting for a consultation that turns out ...
Read More