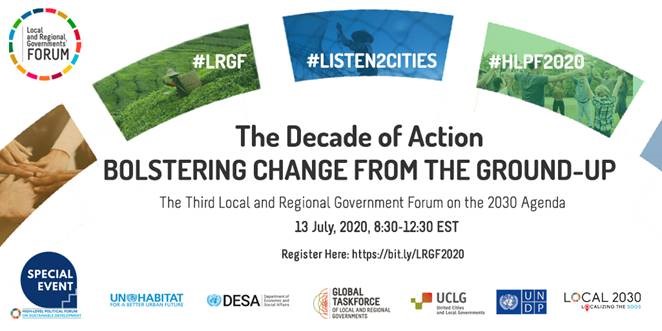 On 13 July 2020, Mr Magnus Berntsson joined the Local and Regional Government Forum (LRGF) organised within the framework of the United Nations High-Level Political Forum. The AER President had the pleasure to represent the constituency of Local and Regional Governments of the Global Taskforce and speak on behalf of those who could not make their voice heard on such an important day.

The 3rd edition of the LRGF was marked by the pandemic, which prevented the participants to convene in New York as planned in the first place. The world has been put to test during the past several months, a test to which anyone was prepared for. As reiterated by many local and regional representatives, all of them found themselves at the forefront of the health crisis, having to coordinate a quick response to protect their citizens and their economy from the pandemic. Some months have passed since the COVID-19 destabilized the global health systems and most regional and local governments have been able to take quick action in responding to the pandemic through universal public service delivery. Indeed, housing played a fundamental role in our fight against COVID-19 allowing social distancing and hygiene, two key elements to stopping the further spread of the virus.

However, while some member states and regions are already recovering and making progress against the pandemic, others, the poorest and most vulnerable ones, the ones that have not been granted access to basic services, are still suffering the most from this crisis.

In this regard, the local and regional governments should take responsibility for the provision of basic services to their citizens in order to improve their living standards and their quality of life. Basic social services are part of the fundamental human rights, and no one is better placed than regions and cities to understand and respond to the needs of the most vulnerable.

According to the last progress report by the UN Secretary-General, half of the world’s population do not benefit from any form of social protection nor have access to essential health services. Food insecurity has been on the rise since 2015 and due to the pandemic, the figures have been exacerbated. Global health systems have been devastated amid COVID-19, which has revealed the insufficient healthcare facilities and medical supplies. Children’s education has been put at risk by the closing of schools during the global lockdown affecting over 90% of the student population, remote education has worked well in some countries whereas in others it has only widened the digital gap. Billions of people throughout the world still lack access to safely managed water and sanitation services which are critical to preventing the spread of the virus.

And these are only a few examples that show how COVID-19 has exposed and widened the profound inequalities that exist in the year 2020 among regions and countries. The AER President remembered to all the participants that we have just entered the decade of delivery and the global pandemic should not undermine the joint efforts and achievements reached so far, and it is the shared responsibility from local and regional governments to ensure that no one is left behind.

As reiterated on several occasions by the UN: there is an increased acknowledgement of the necessity to involve all stakeholders in order to provide basic services to those furthest left behind. Providing basic services means protecting the fundamental human rights, and promoting social, territorial, and economic cohesion. Thus, in order to deliver basic universal services, it is urgent to strengthen multilateral systems, increase knowledge transfer and open dialogue, as well as investment and cooperation at all levels of government.

The AER President concluded his speech with a call to action to members states, regions, cities and civil society organisations to coordinate efforts in order to establish a fair future for all with resilient regions and cities and to guarantee the quality living standards that each citizen of this world deserves.