You are here: Home / News / Bureau Meeting in Gelderland: highlights and takeaways 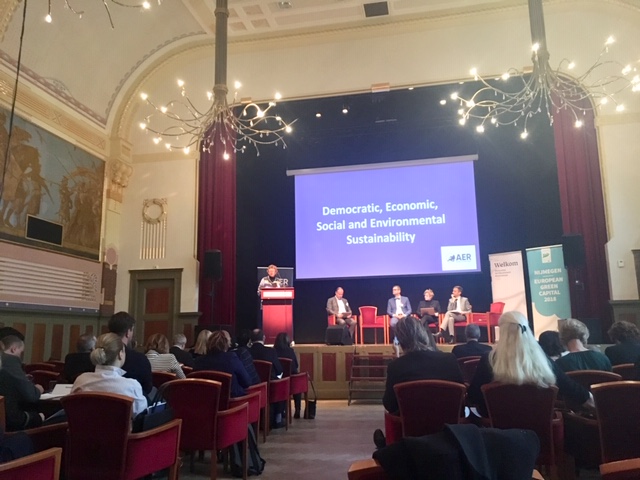 At AER’s Bureau Meeting on 22 November, regional leaders from across our membership discussed interrelated challenges facing regions in the areas of migration, diversity and integration and most effective approaches to promoting diversity and inclusion at regional level.

In a debate moderated by Oriol Amorós, Secretary for Equality, Migration and Citizenship of the Government of Catalonia (ES), our guest speakers Antonio Polosa, Chief of Mission of the International Organization for Migration in the Netherlands, Laura Corrado, Head of Legal Migration and Integration Unit of the European Commission Directorate-General for Migration and Home Affairs, Yoomi Renstrom, Rapporteur for the Reception of Refugees report of the Congress of the Council of Europe, and Mihaela Onofras, Project Manager at the European Association for Local Democracy, engaged with AER members in an exchange about the dynamics of migration, the European and global policies, funding instruments and programmes to manage migration and integration and the challenges and opportunities of a multi-level and multi-actor approach to migration and diversity management at regional level.

The debate will contribute to the AER position paper on migration and inclusion to be presented at the Spring Bureau Meeting 2019.

AER Manifesto for the European Elections 2019

In the run-up to the 2019 European Parliament elections and appointment of the new Commission, Bureau Members adopted the AER Manifesto on European Elections to inform candidates about the priorities of European regions for the upcoming mandate.

AER members stressed that supporting regions’ role in forging a revitalised European project is instrumental in bringing the 2030 Agenda and its sustainable development goals forward and building-up the smart, sustainable and inclusive Europe that citizens want to see.

Calling for a greener, more fair and democratic Europe, with a strong cohesion policy at its heart, the manifesto urges candidates and EU leaders to actively apply the principles of subsidiarity and proportionality, enabling regional authorities to effectively contribute to the EU policy-making and meaningfully engage in the design and implementation of the Union legislation and policies on the ground.

Bureau Members also voted to adopt an updated position on the European Commission legislative proposals for the future EU cohesion policy, setting out the specific changes European regions propose to make to the new framework. The position was brought to the Bureau for discussion by the Chair of the Cohesion Policy Task Force, Michiel Rijsberman, Flevoland (NL).

As the EU sets the next Multiannual Financial Framework and spending programmes for the period 2021-2027, Bureau Members also adopted a position on how the EU can best boost social innovation across Europe, supporting regions’ leadership role in driving social innovation. The position was proposed by Albert Castellanos, Catalonia (ES), as Chair of the Social Innovation Task Force.