You are here: Home / News / AER supports its members from Associated Countries along the European integration process

In course of his two-day mission to Brussels, on Friday 5 February, Mr. Esed Kadric, Vice-Mayor of Brcko District of BiH visited the AER Office in Brussels. Alexandre Brecx, on behalf of Secretary General Mathieu Mori, welcomed Mr. Kadric and offered him a tour of the new AER Brussels office. 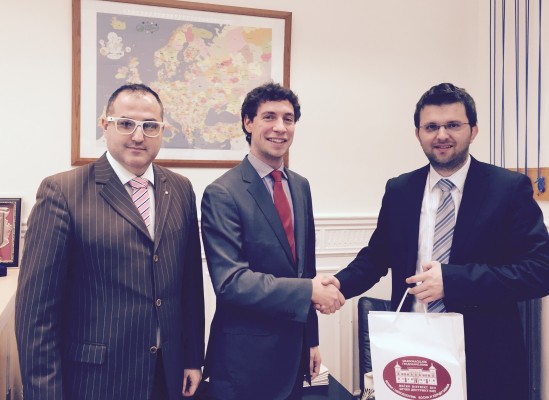 Mr. Kadric offered a brief overview of the current status of Bosnia’s path towards the EU membership and explained that Brcko District of BiH could serve as a model for the rest of the country. He explained the importance of full implementation of the Stabilisation and Association Agreement signed between the EU and Bosnia and Herzegovina. Association Agreements have to be accepted by the European Union and need to be ratified by all the EU member states and the state concerned. The first states to sign such an agreements were Greece back in 1961 and Turkey in 1963.

AER will continue to offer expertise and exchange of knowledge between its members and support the regions from Associated Countries striving towards the full EU membership.