You are here: Home / Uncategorised / Regions for peace-building 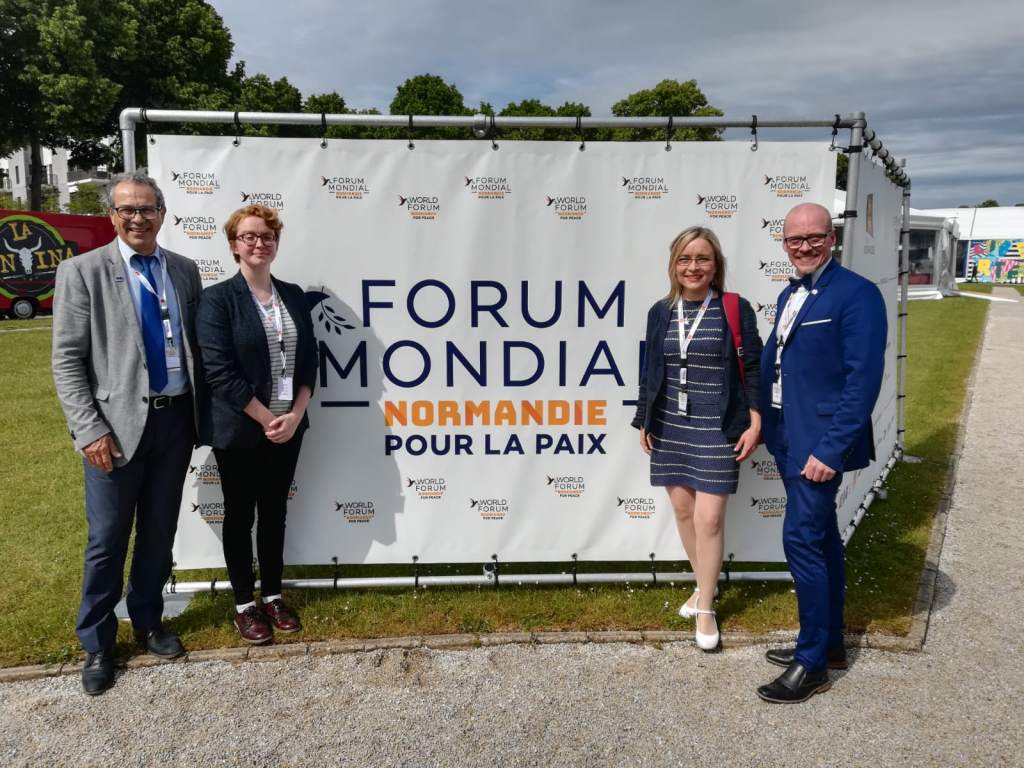 On June 4th, 2019, AER co-organized a debate with the Congress of the Council of Europe about the role of local and regional authorities in peace-building. This debate took place in the context of the World Forum Normandy for Peace. It consisted of a vivid discussion between speakers of a debate panel and afterward with the public.

Moderated by Thomas Andersson, President of the Regional Council of Jämtland (SE) and active member of AER, the debate turned around the question of how local and regional authorities can contribute to peace-building and create stability in their respective region.

Three speakers from different backgrounds were invited and shared their experiences and opinions on the topic. Ms. Kelly McBride, director of the Democratic Society, a non-profit organization seeking more dialogues and deliberation in democracy shared her view from an angle of a civil society representative. In her opinion, one of the most important things local and regional entities can do for peace is making sure that all forms of democracy are given in a territory. All the people living there should have the possibility to influence what happens in their surroundings. McBride suggested, that a more open and participative government, amongst other actions, is advantageous for peace-building.

Mr. Xavier Cadoret, President of the Chamber of Local Authorities of the Congress and mayor of Saint-Gérand-le-Puy (FR) emphasizes the fact of how important the subsidiary principle is to build sustainable peace. It means to give certain competencies to a more immediate and local level so that tasks can be acted out more effectively. The link to peace would be that subsidiarity could guarantee that all the regions of a state feel included in the decision-making processes of a government.

At last, Ms. Dörte Liebetruth, a member of the Chamber of Regions of the Congress and of the state parliament of Lower Saxony in Germany stresses the importance of the local and regional level. Because it is closest to the people, where “we live our everyday life” and experience first-hand what the “decision-makers” conclude, be it on the European or the national level.

Challenges and the future involvement of regions in peace

When it comes to threats to peace, especially in Europe, everyone on the debate panel agreed on certain points. Forces aiming at disintegrating Europe, the crisis of representation and loss of trust in public authorities, the indifference of people, and fake news are big challenges to guarantee a peaceful coexistence. Another big challenge regarding region’s involvement in peace-building is the lack of financial resources of the local and regional authorities to contribute substantially to peace. Also, a lack of experts and professionals is missing in this field.

The panel discussion concluded, that the future involvement of regions and local governments in peace will be in more and more participative and collective leadership, dialogue and cooperation between regions and levels of government, and fostering cultural encounters. Regions should furthermore work for more empathy, encouragement, and empowerment of people to work towards peaceful and stable societies.

Despite countries’ varying levels of decentralization, autonomy, and skills, local and regional authorities in Europe are working to foster ties and contribute to the continent’s stability. By focusing on local and regional issues, the dialogue can often be more fruitful than at the national level.